The sky is a brilliant blue with not a cloud to mar it. The golden roof of the Jokhang shines in the sun, almost painful in its intensity. Smoke rises from the huge urns in the front of the entrance and mixes with the babble of the pilgrims and the clicking of rosaries. The altar room inside is aglow with the light of a million butter lamps, the courtyard outside slick with spilled grease from the lamps. There is more than the usual crowd at Jokhang, doing the kora and their prostrations. The paving stones are polished to a high gleam from the constant rubbing of cardboard squares against the stones and muttered prayers mingle with shared laughter. 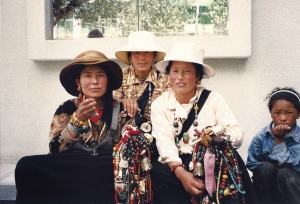 It is a more mixed crowd here than I remember. There are tall Khampa men with red silk tassles wound through their hair. There are women from Amdo with their braided hair ornamented with turquoise and coral. A couple of women sit to my right. Their checkered headscarves say they must be from Yunnan – perhaps Zhongdian or Deqin. There are monks. Some wear the hats with extended brims that I remember from Tagong and Kangding. Many are old men and women. Gray haired and toothless, they wear the traditional chubas. But there are many younger people too – dressed in track suits or western wear they too do their prostrations. The larger than usual crowd is probably due to the Saga Dawa festival. I found a seat on the steps – the same spot that I had had all those years ago. And found myself among friends. Smiling Tashi Deleks greeted me. I am home again. How good it feels! 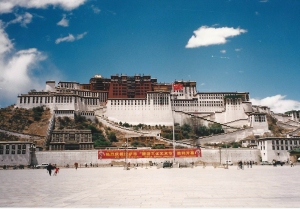 I went walking around Lhasa today; I could barely recognize it. The road in front of the Potala is longer the dirt road lined with the occasional stall selling prayer flags. Now there are broad asphalt streets, complete with traffic lights and a never-ending stream of cars, trucks, buses, rickshaws and people. There are stores lining both sides – glass-fronted and identical in their typically Chinese concrete-block designs. They sell clothes, shoes, groceries and tacky souvenirs manufactured elsewhere in China. The large department store at the corner has streamers strung from the door and a large banner advertising the grand opening. The raucous sound of Chinese pop music played at ear-splitting levels competes with the sound of horns blown by irate drivers. The people are almost all Chinese – Han Chinese lured from other provinces with promises of privileges and tax breaks. Every shop, every restaurant is owned by the Chinese, managed by the Chinese.