There has been a rumour floating up and down the Pamir highway that a horse festival is to be held in Murghab. Nobody knew for certain exactly when nor what it entailed. We arrived in Murghab yesterday and asked around in the bazaar, the usual conduit of all information.

“Oh, so are there many events? What kind of events?” I asked.

“Yes, yes. Maybe” was the response. This was no doubt privileged information not to be given to the likes of us, motley ragtag bunch that we were.

So this morning we set out for the flat dirt bowl a couple of kilometres outside Murghab. The latest intelligence gathered from the reputable quarters of the Pamir Hotel had said the event was to begin at 10 am. Climbing up the small rise, we saw a short stretch, 400 or 500 meters long that had been marked out with wooden stakes. A few young women dressed in frilly long dresses of organza and velvet waistcoats stood around. On their heads were brightly coloured short conical hats, more in keeping with the costumes of medieval Europe.  A couple of men on horses milled around. Two vans had disgorged their passengers and goods at the far end and the women were busy setting up their stalls. A small boy, one of a group got a sharp scolding as he tried to peer inside the multiple plastic buckets. In the usual manner of events like this, ten o’clock came and went as did eleven. But soon after there was a ripple of activity.

By then some of the locals had trickled in as had all the other travelers in Murghab.  The trio of policemen in their peaked caps were officiously directing cars to parking spots. There were a total of five cars and empty space for at least two kilometers in every direction.

The atmosphere was all very low-key. It almost  felt as if the locals had to be prodded into it. But  this is no old, time-honored tradition. It is not the Nadm of the Mongols. This festival was started just five or six years ago in an attempt to revive the spirit of Kyrgyz horsemanship and traditions. A French woman who has been living in these parts for a number of years is the chief architect and the three judges (also French) who have materialized, clipboards in hand, are friends of hers.

Each team consists of a man and a woman, the pairing done by lottery. There are seven teams in total. Both the man and the woman are mounted on horses and race down the track. On the first stretch, the man chases the woman; the objective is to kiss her. At the end of the stretch, they reverse and this time the woman chases the man. She has to hit him with the short whip she carries. I wonder who came up with the rules? Is there a story behind this? For the Kyrgyz, some of whom still practice bride kidnapping, this could well have roots in tradition. 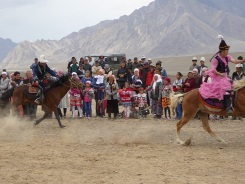 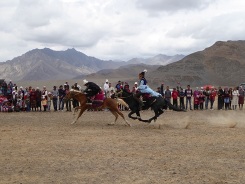 The teams, one at a time race down the track, lashing at their horses. In a cloud of dust and flashing horseflesh they race past the bystanders. A few cheers and yells follow the riders. Even when they are neck to neck, the man hasn’t a whisper of a chance! One of the men briefly came within touching distance of his partner but couldn’t bridge the gap before the end of the short stretch. On the return trip though, a couple of the women seem to have got a few lashes in. A pause in the race we called for when one of the horses decided at the end of one stretch, to just keep cantering.  He had had enough and was heading home. It took the concerted efforts of a pair of other riders to bring the horse back.

Not long after, the races ended and the prizes were handed out to the first three teams. Each winner among the women won a gas cylinder and a stovetop. The men each won a big flat package – I never discovered what it contained.

Low-key it began and ended on a tamer note.  Along with the rest of the locals we trickled back to town.