“Our people came by sea” said the old man, nodding sagely.
“Exactly from where, nobody knows but they came in boats, and so we build our houses like boats” he added, between puffs on his cigarette, his face wreathed in a gap-toothed smile.
In a small roadside café in Ambarita, on the island of Samosir in Lake Toba, I had fallen into conversation with the old man. He seemed to delight in telling tales of bloodthirsty ancestors, especially the creative ways of exacting vengeance. He cackled as he spun out tales of cannibalism and ritual drinking of enemy blood. Every so often he would pause, peering at me with rheumy eyes, hoping to see a shiver or two. I hadn’t the heart to disappoint him.

The much-touted, three hundred year-old stone chairs where the king sat on judgement and meted out punishments is prominently displayed in this part of the village. Despite its bloody past, in the dappled shade of the tree, they seem innocuous. Of more interest to me, were the many stone figures I saw. Barely a meter high and green with moss, they were crude figures depicting guards at the gates and dutiful subjects paying homage to the king. But the ones I found down a small lane in Amabarita, seem to have been forgotten. I have no idea just how old they are, nor what tales they tell. The family in the house next door did not know either, nor seemed interested. 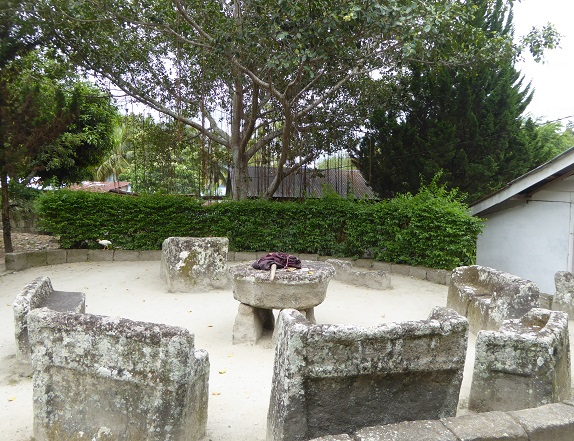 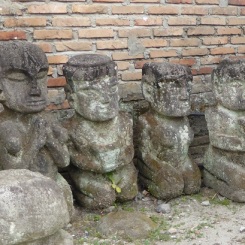 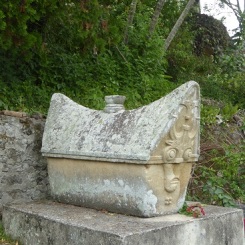 While the old man’s stories of ancestral heroics are no doubt embroidered, the tales of their sea-faring ancestors may very well be true. I remember being told something along the same lines, when I visited the island of Sulawesi years ago. While both styles of houses are equally dramatic, they each have distinctly unique features. 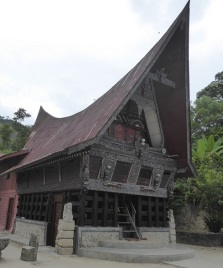 Viewed sideways, the steeply-pitched roofline drops into a saddle before rising back up, giving it the tell-tale boat shape. The short pillars it rests on and the outward leaning walls are the same that I saw in the Karo highlands. But there, the similarity ends. Here, the sharply projected triangular eaves dominate the front and back, with front gable extending further than the rear one. While the rear gable remains unadorned, the front one is the single, most eye-catching feature. It is riot of painted motifs, the intricate patterns swirling among demonic masks placed at intervals. Painstakingly carved out of wood, every inch is painted in bold red, black and white. The panel joining the edges of the deep eave over the balcony, adds a layered look with its equally elaborate designs. The lavish curlicues dance between stylized figures and motifs, making it mesmerizing. The intricacy and lavishness of decorations are in direct proportion to the wealth and status of the owner, the most detailed one being that of an old palace-turned-into-museum, in the nearby village of Tomok. In the same village is the royal graveyard with tombs that are shaped like boats. Some of the tombstones are mini versions of a traditional house. There are stone figures here too, near the tomb, set in a scene complete with musicians, subjects in attitudes of prayer and the figure of a bull, no doubt to be sacrificed. 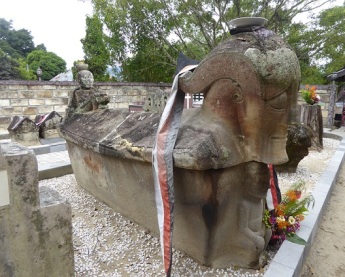 In the old days, the houses were set in a row, facing a common courtyard. A few steps lead up to the short front door and into the house. Small windows, set on each side of the house let in a little light into the dark interior living area. The interior is an open space, without walls, largely utilitarian in nature. Another ladder inside leads up to an attic space formed by a flat wooden ceiling over the front third of the living area. The attic is mostly a storage area, stuffed with family heirlooms and sometimes shrines. In the old days, an open hearth at the front of the living room would form the kitchen, but it is no longer so. In the houses that still in use these days, the interior is used as a living room and bedroom, with couches, tables and the requisite television blaring in a corner. Additions made onto the back form the kitchen and bath, the bulk of it discretely hidden behind the main building. The houses these days are mostly modern, made of concrete but the art of woodcarving is very much in vogue. Young students learn the art and use as hammers, the filled-in horns of buffalo, just as they did in the past. 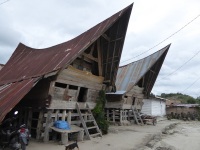 The single-lane road that connects villages, wraps around the island with the green ridgeline at its center. Although intensively farmed, it still retains a feel of a slow-paced life. Water buffaloes peer inquisitively as I walk past and a few herons stalk in the fields. The fields are a brilliant green of rice fields and in the distance, I see the boat-shaped roofs among church spires. Just about all the Batak are now Christian, and every village seems to have a scattering of churches of different sects with Catholic, Protestant and Pentecostals dominating. Smiles return my greetings as I stop to chat along the way.