“Ca va?” I heard as I walked past the shops heading toward the square.
It came from the trio of young men as they lounged in one of the park benches placed at intervals along the pavement. A common practice in this part of the world to strike up a conversation, it is usually aimed at foreigners, women in particular. This is the more genteel version of the sibilant “psst” that you hear sometimes.
“Merhaba” I said as I walked past.
Off the bench jumped one of them and started walking with me as he rattled off questions. Clearly I did not speak French so he switched to English. He was dressed in jeans, a shirt with pointed collars, a leather jacket and dress shoes that had been shined to a high gloss. This was clearly hip Mr. Marrakesh. His hair was slicked back with several kilograms of gel.
“Where are you from?” asked Slick.
“Where do you think?” I replied.
This started them off on a guessing game that spanned the globe. The other two had caught up with us as we kept walking. One of them hung back a little while the other raised his arm with his forefinger pointing up like an eager student as he named countries. 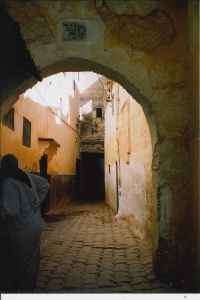 “Spain”, said Eager Student.
“No”, I said.
“Italy”, he said.
“No” said I.
“France” said Shy.
Slick immediately scoffed. “She don’t speak French, how is possible she from France?”
The game continued winding its way around the globe and when they finally they hit upon India, I said yes.
“Oh, we love India!” exclaimed Eager Student. I had clearly shot up several feet in their esteem.
“Why?” I asked. “Have you been there?”
“No, no, I want to. But we see many films from India” said Shy. “We love them!”
“Look” he said pointing to a poster on the adjacent wall. Sure enough it was a Bollywood film.

We had reached the cafes lining one side of the street opposite the square and Slick asked if I would sit with them for some mint tea. Okay I said, just one glass. So we sat and I was interrogated thoroughly about the Bollywood films that they love.
Had I seen this film or that, they asked.
“No” I said, all the names sounding totally unfamiliar.
“Have you seen Sharukh Khan?”
“No”, I said, wondering if this was the latest dashing Bollywood hero.
“Do you know any actors?”
I tried my best to dredge up some names from distant memory but failed. I could see my pedestal teetering.
“Can you sing?” asked Shy.
“No”, I said.
“Dance maybe?” asked Eager Student.
My “not really” elicited a collective sigh from the trio. I was no Indian, or a paltry excuse of one, was the unspoken verdict. We exchanged names and they asked me how I found Morocco. I like it, I told them although I have only seen Casablanca and Marrakesh so far. They wanted to start showing me more of Marrakesh right then.

“It is too late now”, I told them. “I am going to eat dinner and then go back to my room.” I had to pack because I was leaving the next day for Ouarzazate.
“Oh, Moroccan food is very good” said Slick aka Riad. “Have you tasted our tagine?”
I told him I had and it was okay, not that great.
“You must taste my mother’s tagine” said Ahmed aka Shy. “Once you eat that, you know really good tagine”.
“Maybe” I said as I got up from the table. The trio held a quick conversation in Arabic and then Ahmed said “Why not now? You come to my house and eat tagine”.
“Now?” I asked.
“Yes, now” said Ahmed.

I don’t know what made me say yes. We said goodbye to the others and I followed him through twisting lanes in the labyrinth of the souk. If he has some devious plan in mind, I remember thinking, I am never going to be able to find my way back. But my gut said this was okay. And so it was.

We went to his house. I met his parents as well as his sister, sister-in-law and his one year old niece. His older brother would be home soon, Ahmed told me. Then we would all eat together. And so we did.
“And what you think now of the tagine?” asked Ahmed.

“Good”, I said. I did not having the heart to tell him otherwise.
I thanked them after the meal and we said our goodbyes. Ahmed was going to walk me back to the square. I wondered what I might give them in thanks. 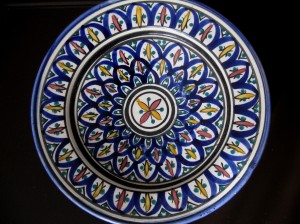 I usually carry some gifts in my pack but this had been an impromptu invitation and I hadn’t anything. His sister had liked my earrings and was happy to accept them. His mother proudly wore the bracelet I slipped off my wrist. And then she asked me to wait a bit. She left the room and came back bearing a decorative plate. She had taken it off their living room wall and presented it to me. I was stupefied! It was beautiful, painted in vivid colors. And more than anything it was the gesture that made me speechless.

“To remember us by” she said, as Ahmed translated.
I have it on my table to this day.
I see it and remember them.