The tarmac road winds through the highveld with vast stretches of woodland on either side. But these are not old growth forests, nor are they natural woods. Stretching across the rounded tops of the shallow hills and across valleys, these are pine plantations, entirely manmade solely for the purpose of the timber industry. In each field the trees stand like silent sentinels, at the same height equal distances apart. Occasionally I see a red dirt road that leads off through the trees signposted with the name of the farm. Immense logging trucks carrying huge loads crawl along the road holding up traffic.

Roadside signs point out the attractions and long lines of cars and the occasional tour bus pulls up next to the strings of stalls selling souvenirs. People wander over to lookout points, peer over the edges and pose for the mandatory photographs. 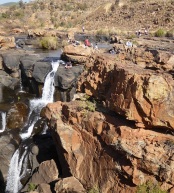 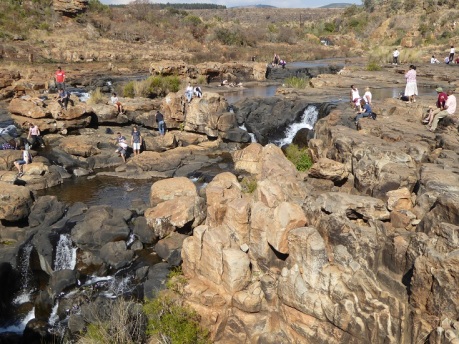 The sights bear exotic names like “God’s Window” and “Wonder View” and “Potholes” firing my imagination. But the actuality feels more than a little anticlimactic. The Potholes are a series of shallow pools where small waterfalls cascade from one pool to another. Teeming with screaming groups of school children out on a field trip and hordes of families complete with baby carriages, it is the quintessential day trip for windscreen visitors. Negotiating this part of South Africa via public transport had been an adventure in itself and I found myself wondering if it really had been worth the effort. A couple of tourists who had a car had kindly given me a ride to these sights, not reachable by public transport. We came to the long narrow gorge called the Blyde River Canyon. And gazed out at the gorge from the paved walking path above. Bluish-gray mountains recede into the hazy distance like cardboard cutouts and far below the waters of the river sparkle. Pretty enough I suppose, but underwhelmed at the sight I mentally rename it Bland River Canyon.