The area surrounding present day Granada is said to have been populated since 5500 BC and it was certainly on the map of ancient Rome. Known as Elibyrge in ancient times, by the first century AD it had become known as a Roman municipality called Illiberri. But its rise to fame and establishment on the world map really stemmed from 711 AD when it was conquered by the Moors and re-named Al- Andalus.

And with this conquest arose an era that spanned from 8th to the 15th century AD. As with all rising civilizations, art, science, medicine, music and architecture thrived along with commerce. Some of the greatest scientists, philosophers, poets and writers were residents of Andalusia at one time or another. Giants on whose shoulders we stand such as Ibn Sina, called Avicenna in the west whose Quanun or Canon was the sole medical text for more than a century in Europe was educated in Andalusia. As was Ibn Rushd (known as Averraoes in the west), Ibn Zuhr (Avenzoor) and Al Kwarezmi (Algorizm) were all Muslims who were educated in Andalusia during its golden age.

The name Granada originates from Garnata-al-Yahud or Karmata-al-Yehud which translates as Granada of the Jews. They occupied the Jewish area that lay at the foot of the hill on which stood the fortress of Alhambra. To this day this area of the city now called Albaicin, remains the most captivating part of the city.

Narrow cobble-stoned streets barely wide enough for four people wind up and down the hillside, opening up occasionally into small plazas. In the plazas are fountains with ornate spigots that spout drinking water into troughs as it did many centuries ago. Some of the long-ago aqueducts still function albeit refurbished through the ages. In parts where the gradient of the street is too steep, there are steps. Some are renovated but many wear tell-tale dips in the center from countless feet that have trodden them in the past and continue to do so. Like all old cities that grow unplanned, there are odd corners, dead-ends and alleys that narrow and end in the blank wall of a house.

On either side of the streets rise buildings in an almost continuous wall, sometimes just a meter or so apart. The upper floors are graced with tiny balconies with ornate iron grills. Painted in warm earth tones, the walls reach up to roofs that are lined with terracotta traditional tiles. 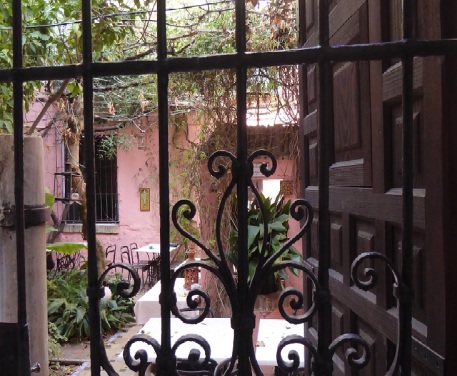 But at street level, the walls are mostly sheer-faced and the houses announce their presence via doors that are flush with the wall or a tiny grilled window. Occasionally a door left ajar or an open window gives one me a glimpse into the world inside. The houses are usually built around a central area. An interior garden with orange trees heavy with fruit or a courtyard with a tinkling fountain flanked by lush greenery, they are a delight to the eye. The house is built around this central focus with balconies draped with vines and creepers or with occasional flapping lines of laundry. Sometimes the smell of cooking drifts out on the breeze. 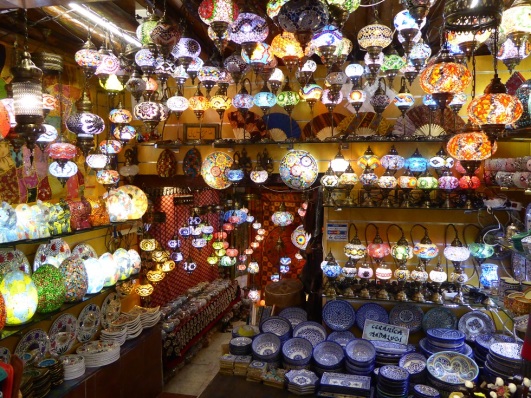 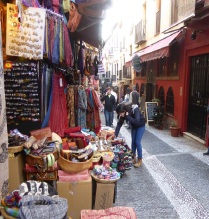 The narrow streets are lined with shops and feel more Moroccan than Spanish. The same intricate lanterns that one sees in Egypt and Morocco grace many a shop. In others there are piles of leather goods – jackets, bags, wallets, shoes and cushions are piled in tempting heaps. The sound of conversation is Arabic – most of the shopkeepers and indeed a large fraction of the population here are Moroccan. A snippet of Arabic music teases my ears as I wander. The smell of frankincense and myrrh drifts out of incense burners at some places. In others it is the smell of the nargileh or hookah. In yet others it is the smell of kebabs that perfume the air.