It is just as well that I did not set out for the trek today; I couldn’t have. I have been paying for the revelry last night and hanging out in the hammock for most of the day is just the recipe. That and stocking up with food and fuel. Senora at the posada took me in hand and trailing after her in the market, I got all I needed including fuel for my stove. I’m not at all sure how clean it will burn, but burn, it does. A group of trekkers who just came out of the park yesterday and are staying at the posada say the park office is finicky about handing out solo permits but that is a hurdle I’ll cross when I come to it. From their guide I got a topo of the park. The guide Carlos will be heading up again by the time I return and I can return the topo then.

Somewhere on the trail to Pico Humbolt

Waking up early is a noble aim that I should give up on. But my late start was offset by timely connections. The bus to Tabay and the por puesto to the national park got me to the park sooner than I thought. Better yet, to my delight, the friendly driver of the port puesto took me all the way to the park office instead of dropping me at the first gate. He jabbered non-stop along the way, my expressions of blank incomprehension peppered with occasional rudimentary understanding, clearly not a barrier. 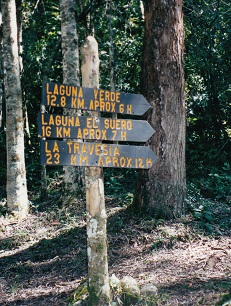 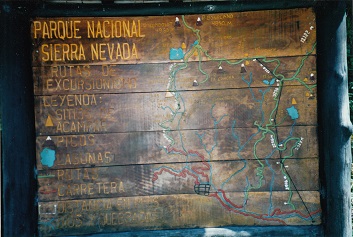 Those twinges of worry about not getting a permit also proved groundless and I started up the trail early afternoon. The late start today meant camping before I reached Laguna Coromoto, but I want to at least try and reach Pico Humbolt on this trek. Crossing La Travesa requires ice axes and crampons and if so I’ll turn around and come back the same path. Pondering my options, I climbed the trail. Thickets of ferns and bushes formed the cloud forest and soon after I was in a forest of waving bamboo. The vegetation kept the trail mostly in the shade with dappled patches of sun. By the time I reached the first major stream crossing, I met a couple on their way down carrying monstrous packs. Despite ice axes and crampons, they could not cross La Travesa they said, to be careful. I had no intention of trying, I told them as we said goodbye.

Waning light meant looking for a site sooner than Laguna Coromoto and there was just the perfect one a few minutes later. The couple had mentioned it to me and it was perfect. A small flat patch, sheltered and hidden from the trail had me pitching my tent quickly at the temperature dropped sharply. The mist that had come creeping up is everywhere now and I cannot see the mountains anymore. Everything is hidden behind a canvas of fog. It is barely seven and already too dark to write.

The broad, well-graded trail continued amid greenery. Bamboo fronds and vines sweep across the trail and strands of lichen dangle from tree limbs. A few crossings had me debating whether I should switch to Tevas for crossing but I didn’t need to. Finding a stout stick made boulder-hopping easy.

The only people I met today were a group on their way down. Their guide said all are heading to town for the New year’s eve festivities; there is nobody else on the mountains now. I shall have the luxury of choosing any site for camping. They too said the ice and snow requires technical gear to get up to Pico Humbolt. So, with that scratched off the list I’ve gained some time. I decided to be lazy and while away a day at this spot. 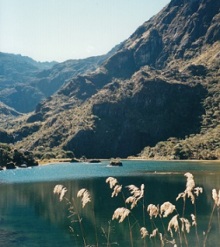 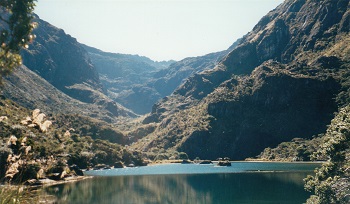 It is a pretty site. The mountain walls are steep enough that flat patches are few and far between. A small flattish patch under the bare overhanging branches by the lake has volunteered itself as my campsite. The river that the trail has paralleled, goes over a rocky bed, under a tunnel of bamboo fronds and form a small pool. It looks inviting but dipping my toes into the water is enough to tell me that a sponge bath is the order of the day, rather than a full dip. All day I could hear muted sounds of fireworks, the volume growing as night approached. Once in a while I thought I even saw some sparks of light in the night sky. But it is freezing cold and I didn’t tarry outside too long.

The trail has turned rocky and steep, making all four paws necessary at times. I had to tell myself to be extra careful. There are no others going up or down on this trail so I’d better not fall I told myself sternly, and take my time along the trail. A few wooden bridge-like structures hugged some of the cliffs, traversing the rockface. They seemed to be perched with questionable stability on loose rocks and I tried not to look at the sheer drop as I crossed gingerly.

Laguna Verde is a deep blue-green, the wind making small furrows on the surface. It is above treeline, in a bare windswept area. As all such areas, this appeals to me immensely but it is not exactly easy to pitch a tent that requires pegs. But between rocks and a small patch of turf I manage to anchor the tent. Despite the beauty of the spot I am inside the tent scribbling away – the wind makes it bitterly cold outside. Methinks the water bottle will freeze tonight. I’ve been hearing the same faint sounds of fireworks today as well but haven’t seen any sparks in the sky. The festivities are still in full swing today I think. 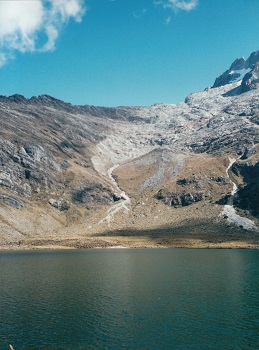 I bailed. Tucked my tail between my legs and am heading out of the park. Instead of heading out today, I am spending another night here just because. I even managed a dunk in the waterfall today and feel distinctly virtuous.

I met a couple of people heading up the trail today and as usual we stopped to chat. And lo and behold, I met Carlos again with a new crop of clients, heading up. I returned his map with thanks as well-wishes for the new year were offered all around. Carlos reminded me to stop by the agency he works for in Merida. He said to mention his name when asking for trips to the Llanos. Pondering the rest of the month, I spent the day plotting plans for the rest of the trip. Tim and Vernon at the posada had waxed eloquent about the Llanos. Methinks that’ll be next on the agenda.