We sat squashed inside the truck on the two long benches along its sides. There were too many of us and some stood, holding onto the metal bars against the cab. Torn canvas covered the sides and top of the truck, flapping against the sides as we jolted in and out of ruts on the road. The back was open and the silhouettes of the two guards with their rifles stood out starkly against the moonlit sky. 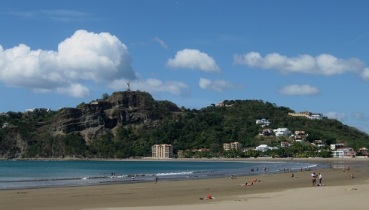 Our destination was a wildlife refuge on the beach some twenty kilometers south of town. But this is not beach that is overrun each day with bathers, surfers and boats. Set along the Pacific coast, the Refugio de Vida Silvestre la Flor is a stretch of beach that is witness to one of those astonishing migrations in the animal kingdom. Each year between July and December turtles come here to lay their eggs. Most numerous are the Olive Ridley turtles but they are joined by some Leatherbacks as well says our guide. Turtles wander the ocean from the day they hatch, mate with multiple males 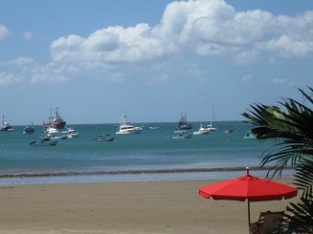 and wait to fertilize their eggs. When they are ready, they swim hundreds of kilometers to the beach where they were born and begin the laborious process of climbing up on the beach to dig a hole. Far enough from the reach of the waves, the hole itself is thirty to forty centimeters deep and about twenty to thirty centimeters in diameter. After the exhausting process the turtle lies in a trance and it is then that poachers are at their most active. Turtle eggs are supposedly an aphrodisiac and fetch large sums on the black market. Lately the poaching has become rampant enough for the government to assign gun-toting guards to these nesting sites. No less lucrative and therefore dangerous is the hatching period. This is what we were here to see and guards that accompanied us were for our protection.

Armed with headlamps with dim red lights to minimize the sense of intrusion we walked to the beach fronting the ocean. The sand littered with rocks and tree bark looks like any other sand on any other beach. But wait! There is a spot where the sand seems to shift and move and re-settle. There it is again! Something seems to be burrowing out from under the sand. We watch and before a couple of seconds have passed, a tiny head pokes out of the sand. A flipper pushes its way out of the sand. Then another head to the left, one to the right and another just behind pokes out. It is almost as if the sand bubbles and erupts and the baby turtles tumble out. Around us are more pockets of similar eruptions with wriggling, heaving, tumbling masses of little baby turtles. 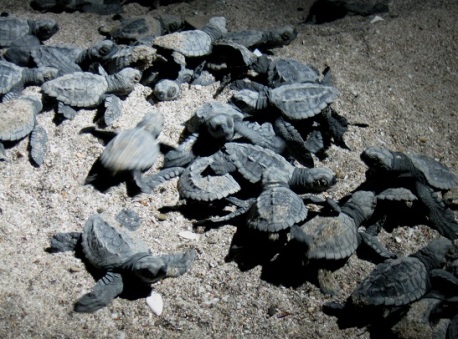 They have hatched out of the eggs using a hard “beak” atop their noses and spent the last couple of days burrowing vertically through the sand to the surface. They seem to be in a frenzy as they climb over one another out of the crater of sand. The more energetic ones or the stronger ones or perhaps the ones that hatched from the topmost eggs appear first and the rest soon follow. As they climb out they seem to have an unerring sense of orientation. They make for the waves, scrambling as fast as they can. There are inevitably ones that are too weak to climb all the way or even when out, disoriented enough not to turn

toward the crashing waves. But even the ones that are dashing toward the waves are not out of the woods yet; there are any number of predators lying in wait. Shining my headlamp into one of the holes I see a crab with its mouth agape and claws at ready, waiting for a meal. This is the age-old song of nature and the survival of the fittest but we found ourselves rooting for the laggards. Run, ninjas, run, we urge them on. They scamper for three or four steps and pause. Then as the moon comes out from behind the clouds and the surf spreads on the beach, they scurry again heading directly toward the pounding waves. We 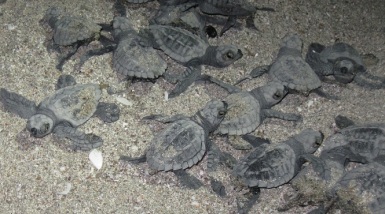 have to watch where we step – the entire beach is awash with scurrying little turtles, each barely a few centimeters long. Some wriggle over our toes as we stand still and some, lacking that inner compass try to climb up our legs.

Each nest has thirty to forty eggs and in the space of two hours we had watched four to six nests erupt into this frenzy of activity. They reach the surf and float away on it as a wave recedes. We find ourselves cheering but this is only just the beginning of their journey. There are dangers aplenty in these waters and only one in a thousand will live to adulthood. How many of those will find their way back to this beach I wonder. To dig another nest, lay another clutch of eggs and begin another generation?