Imagine dusk settling over an old neighbourhood in the backstreets of Kyoto. The black tiled rooftops and tree branches are silhouetted against the deepening indigo sky. The sagging telephone lines with their mess of cables stand out like strands of spaghetti. An 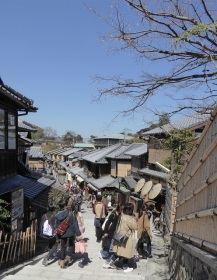 old man, bucket and washrag under his arm, makes his way down the cobblestone street to the public bathhouse, his geta clacking his approach. A group of women gather near the doorway of a traditional wooden house and their gossip and laughter floats in the air. The windows of the corner sake shop are alight and a burst of laughter trails out the door. The owner calls out a greeting to the newest arrival as day labourers and pensioners gather within to leaven the day’s work with a glass or two of sake. The vegetable stand and the tofu stand have shut down for the day. So has the flower vendor. The seal carver, the knife sharpener and the lacquerer are closed for the day as well. The smell of cooking laces the air as night tucks the houses in for the night. The long lines of tiled roofs blend into the night, appearing to wriggle like the eels they are supposed to resemble. Lights come on in the latticed paper windows of the dark wooden houses and a temple bell tolls the end of the day.

The scene may appear to be from long-gone days but could well be true as little as thirty years ago. Fast forward to the present day with its traffic-clogged streets and screaming neon lights. To the multi-storied buildings of glass and chrome. To modern apartment buildings and glitzy shops that line broad streets. To the stream of pedestrians who walk by cell phones glues to their ears. But sandwiched between modern apartment buildings are a few old wooden houses still. The lattice windows have glass panes now instead of paper and the

doors sport fancy modern locks. There may be a car tucked into a driveway that is just a few inches larger than the car itself. But over the doorway hangs a good luck charm from the old days, made of straw and embellished with symbols drawn from tradition that are centuries old. Many of the older houses have been converted into restaurants and many are shops. Some of the families living in them can still lay claim to the skills of their artisan ancestry. And some still ply their trade in the manner of generations before them. Part the curtains of an old shop and you see the old traditions alive in the glazed and painted pottery and in the carved wooden seals and utensils. 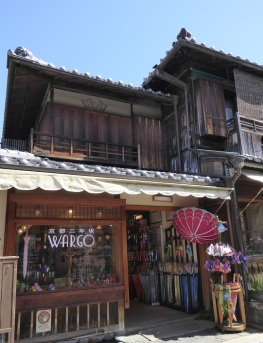 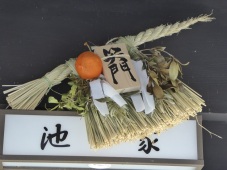 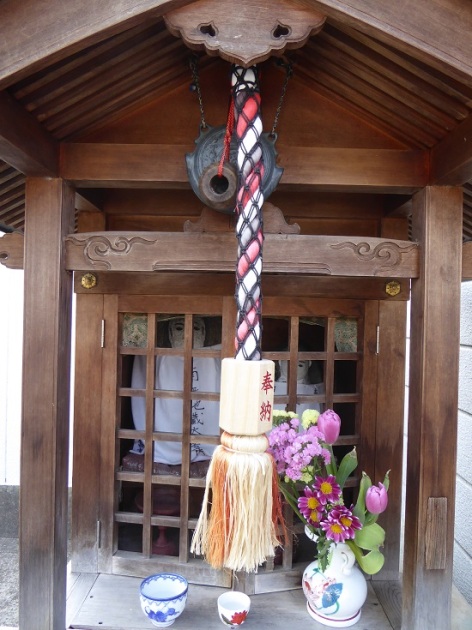 Many are the traditional buildings that still house families, their doorways exuding a charm of understated elegance that is the hallmark of the Japanese. It lies in the spare decorations, in the good luck charm above the doorway, in the tiny array of potted plants and flowers that grace the doorway. It lies in the beauty of the miniature temple outside some of the houses to bless the house and its occupants.

Tradition lives on in the bright kimonos worn by young women, especially on holidays and to visit the temples and shrines that dot this city.  It is in the long lines waiting to make an offering or a prayer to their shrine of choice and in the scores of people wriggling through the hole in the rock in front of the deity said to bring love to the faithful. In the ornate kimonos of the Maikos and Geishas with their elaborate hairstyles and makeup. It is in the scores of fortunes printed on paper that is twisted into grids near the shrine. They flutter in the breeze like an origami version of cherry blossoms that will burst on the trees lining the riverfront and the parks. Tradition lives on in the monk or nun with their alms bowl at a temple site. It lives on in the food that is prepared and presented with painstaking attention to detail. In the fast-paced humdrum of modernity, traditions live on in a myriad of ways, some more subtle than others. 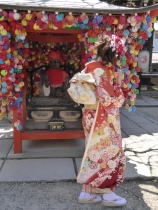 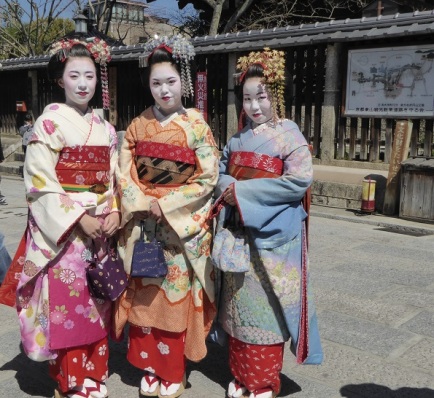 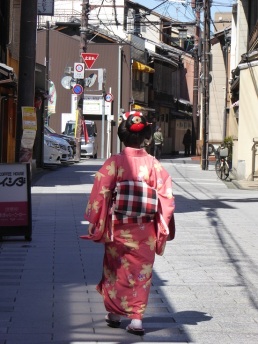 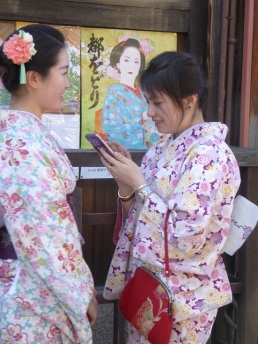 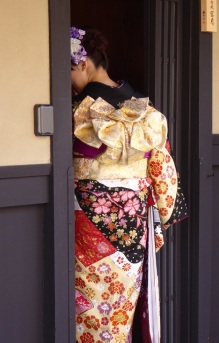