The center of town in Mbabane is chock-a-block with modern glass and chrome buildings, shopping malls and KFC featuring prominently. Yet a bare five minutes on the road I see sheep grazing on the hillsides next to small huts, their tin roofs held down with piles of bricks and stones. The roads are modern tarmacked ones but just beyond are dirt roads leading off to small huts in the valley. Along the length of Ezulwini valley are cranes lining the single highway and men in hardhats busy bringing up slick new buildings. And next to the highway a man walks by dressed traditionally with cloth wrapped around his waist, an animal skin headband and beads criss-crossing his bare torso. In a bar in the modern shopping complex among other patrons dressed in the usual western wear is another man dressed traditionally nursing a beer and poring over his  iphone. Not far away in Manzini an open air market is frantically busy, humming with people pawing through piles of clothes send by donation organizations like Goodwill and the like.

Looming over the valley is the Execution Rock, traditionally a place where wrong-doers were put to death by pushing them over the edge. It was used in the not-too-distant past and according to some may well be used again. Down the road barely a couple of kilometers away is a (supposedly) five-star resort complete with spas and Jacuzzis and masseuse. At the other end of the valley is a brand new shopping mall lined with stores, mannequins and clothing that have virtually no difference from others in any part of the developed world.

The contrast is even more marked judging by the articles printed in the in newspapers. The Times of Swaziland reports on the four-day Sibaya, or the People’s Parliament with stories that could well have been published in Ripley’s Believe it or Not. Making headlines, a priest of a village is accused of cutting out photos of the King, piercing the photos with needles and putting them in a pot while muttering spells. Severe punishment is a certainty even death penalty according to some commenters. Another story taking center-page is of an upstanding member of the community reporting that the drought experienced by the country is a direct result of the disrespect shown by Swazis toward their King. Two half pages are devoted to the story of a sacred rock from the Mdzimba mountains, propitiated with ancestor worship that is moved, to be placed prominently on the main road in front of the Royal Palace. Other articles are devoted to the status of trade relations with the neighbouring countries and efforts to boost them. Of the failed one-room houses that was the scheme of one of the ministers. Of how thugs harass and rob the tenants of yet another development complex. 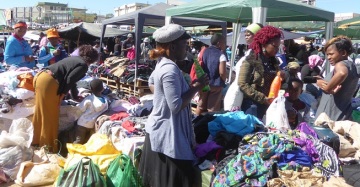 The Royal Palace is a building which bears an uncanny resemblance to a Soviet weapons silo and is likely the only royal palace in the world to boast a cattle byre on its grounds. It is here that the four-day Sibaya is held. People stream to it dressed in both western as well as traditional clothes. There are no seats, tables or podiums. Nor are there any facilities. People sit on the dry stubbly ground, their legs decorously outstretched in front of them. Some lean on the woodpile next to the byre. Those speaking do so sitting on the ground as well, holding forth over a microphone. This is no small gathering; there are reportedly a couple of thousand or more attendees. There are locals, people from distant villages, members of the parliament and diplomats from a scattering of foreign consulates.