“There are some others in the village but they are not proper ones” said the old man. “They have not studied but have just set up a business” he said. “People go to them for doing bad things. I don’t do that; if I use my power for bad things, the power goes away” he told us with a smile.

I was torturing an old man who is a Sangoma or traditional healer of this village with my atrocious Siswati as I asked him questions.  He had been reticent at first to let me take photographs or even to peer inside the hut but something must have made him change his mind. There is only so much of my brand of siswati aka ear-bashing he could take! Thembekile and I were invited in and taking off our shoes we stepped inside the cool dim interior.

There are two mud and wattle huts with thatched roofs in his plot of land. One is where he practices his medicine and the other where he lives. Next to them is a fenced-in corral for his goats. The hut we entered was about four square meters, the walls and floor of packed mud. A couple of nails driven into the walls had rope strung between them and on this hung a number of folded cloths –  the printed ones that are wrapped around the waist or about the shoulders. On yet more nails hung a pair of matted hairpieces decorated with cowrie shells. Some odd shaped woven baskets hung next to them. In one corner were sticks, some with knobby ends, some with beads, some with carved ends. A couple of long necklaces and one of those anklets with rattles were draped next to them. A short table stood in front of us holding stubs of candles and burnt matches. At least half the floor was taken up with bottles, jars and cans of all sizes and – they contained the herbs, potions and medicines that he doles out. 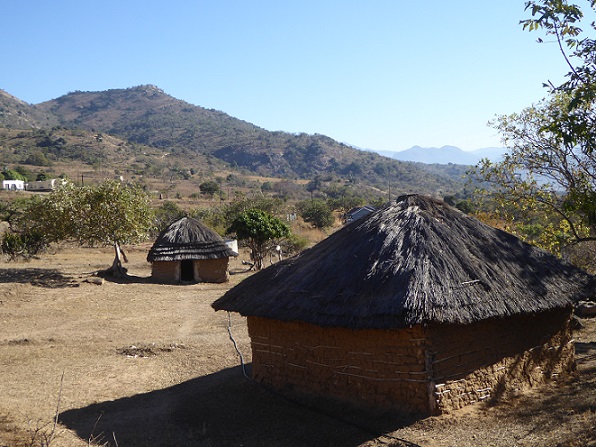 An entire side of the hut was crammed with bags of all sizes and shapes – plastic, canvas and cloth covered bundles of I knew not what. On the floor next to me were a couple of earthen bowls converted into drums with goatskins stretched tight over them. These he used sometimes to summon spirits he said. The memory of a shaman I had met in Mongolia sprang to mind. And that of a Tibetan healer as well. The shapes of the drums may be different but the way they are used are the same as is the purpose. I had that tell-tale feeling of amazement when encountering similar practices in places that were half a world away.

With Thembekile acting as interpreter I continued my questioning. He had a half smile on his face as he patiently answered my host of questions.

“How many patients do you normally have?”

“With what kind of problems do patients come to you?”

“What medicines do you give them?”

“Where do you get the medicines from?”

“Can you inflict harm as well?”

That was when he told me about the other fake sangomas, the ones that do harm. He uses only herbs that collects from the forest to make his medicines. How did he become a sangoma, I asked. Where had he learned how to be one?

He had had dreams as a teenager and this is usually a sign he said. But he had ignored them, had married, had a family and even worked in South Africa in the mines. But in his late thirties, the dreams had come again with greater frequency and finally at age forty he had given up that other life and become a sangoma. He had gone to learn, he wouldn’t divulge where, and studied. Then he had come to this village and has been practicing for the past twenty years. But it is hard he said; people go to hospitals and rarely come here nowadays. Or they go to those others who claim they can cause harm to one’s enemies.

How did he diagnose his patients, I asked. I wondered whether he read the pulse like I have seen in other parts of the world. Or did he divine the problem and diagnosis laying his palm on the head?

He spread out a rush mat on the floor and took a pouch from one corner. Crouching on the floor, on his knees, he rested his hands in front, facing the mat. Blowing on the bag once, he shook the it and then threw them onto the mat. Out of the bag dribbled chicken bones, a few knuckle bones from probably a pig, some large and small cowrie shells, a pair of dice, some mahjong tiles, some bits of torn plastic and a pair of plastic bottle caps.

“The bones tell me all I need” he said. The way each piece lay told him the problem and then he could treat the patient. Looking at the spread out pieces, I asked him if he saw anything.

“Oh yes” he said with a twinkle in his eye. But he wouldn’t tell me what he saw.

“When you come back again” he said. “I will tell you”.

But he had unbent enough to let me take a single photograph.