To the east of Jordan valley all signs of greenery evaporate and all you see is stark unending desert. Some scrubby thorn bushes keep watch by the road and torn plastic bags pierced in the thorns wave like flags. The cracked ribbon of tarmac weaves through the desert haze and electric transmission poles stand like sentinel at periodically intervals. There are no cities or towns or habitation of any sort. Sometimes in the distance I see a dust cloud raised by small herds of sheep. There must be a few Bedouins in the area but I have yet to see any of their tents. Every so often I see a truck carrying freight heading east and far less frequently one heading in the opposite direction. The signposts read out the distances toward Iraq and Saudi Arabia. It is not all that far from the border.

There are a number of ruins dotted around this area dating from the Umayyad reign. Some bear inlaid, inscribed or carved information but there are others that stand in enigmatic silence, a puzzle yet to be solved. Lumped together as “Desert Castles”, these sites that get the short shrift from most visitors are a delight.

Is it a castle? Is it a fort? Is it a caravanserai? The answer is locked in the stone and the key long lost in the mists of history. The square structure squats in the middle of nowhere, too small to have served as a castle, too far from any trade routes to have been a caravanserai and architecturally unsuited to be a defensible fort. Although still in reasonably good condition, nothing seems known about the origin or function of this building. The only known fact is gleaned from bit of graffiti scrawled above a door in black paint. In the time-honoured manner of all graffiti artists, it records the name and date: Abd Al-Malik, son of Ubayd wrote this on Monday, three days from Muharram in year 92. And so we know this building was used in 710 AD. There are times when graffiti can be a boon! 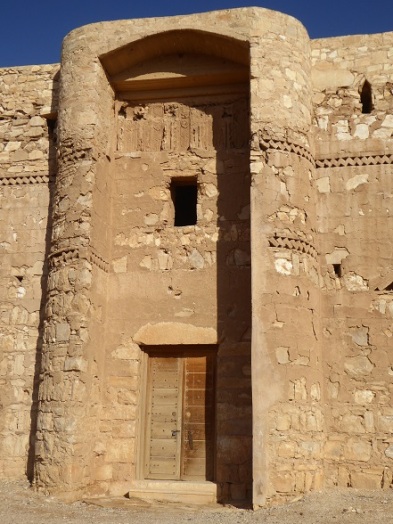 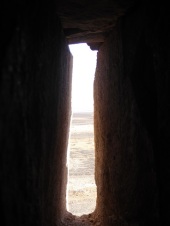 The Umayyad rule of eighth century stretched from Damascus to Jerusalem and with it grew palaces and castles, many of them far-flung from the capital of Damascus. Built around 730 AD, Qasar Amra was once an extensive complex with a castle, a garrison, a forty meter-deep well with likely donkey-driven winch and a dam. Most of this pleasure palace lies in rubble but the well and what was once the hammam or bathhouse still stand. The appearance of the building may seem small and unimportant from the outside, but one step inside and I gasp. 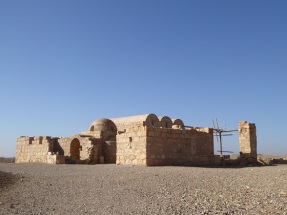 Every inch of the ceilings and walls are lavishly painted, the style, a distant cry from the stylized paintings of latter Islamic eras. An image of six kings in the entry hall shows the rulers of neighbouring powers. Research has identified four of the depicted kings as the Byzantine emperor, the Spanish king Roderick, the Sassanian Persian Shah, and the Negus of Ethipia. The two others are unidentified, speculated to include Turkish, Chinese, or Indian rulers. I crane my neck to peer at the images, marvelling at the level of detail. 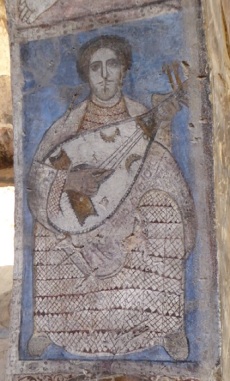 The frescoes, still vibrant in colour show pagan themes, Byzantine style portraits and hunting scenes. There are anthropomorphic details of animals and birds and inscriptions in Greek and Arabic. There are paintings that show naked women in defiance of latter day Islamic dictates. A representation of the zodiac on the domed ceiling of one of the bathing chambers is said to be one of the earliest known surviving portrayals of a map of the heavens on a dome.

Close to the Iraqi border is the Azrak oasis, the only water source in a vast desert region. Not surprisingly, this area was known to have been settled was settled in antiquity going back to the Romans. Its present form however is attributed to renovation and expansion by the Ayyubids in the 13th century, using locally quarried basalt. Its location ensured continued use as a fort by the Ottoman empire and most recently in 1917 by the TE Lawrence, of Lawrence of Arabia fame. Today this gray brooding hulk of this fortress stands in the town of Azrak, its massive doors made of solid stone guarding the entrance. Most of the structure remains meriting a trickle of day-tripping tourists occasionally. 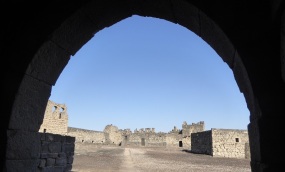 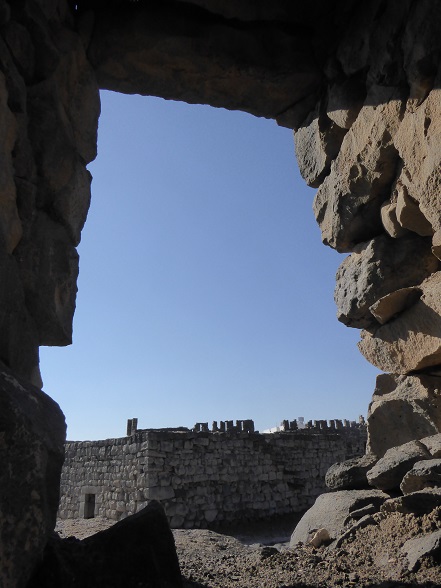 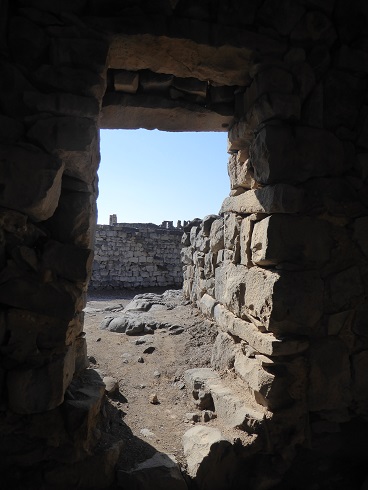 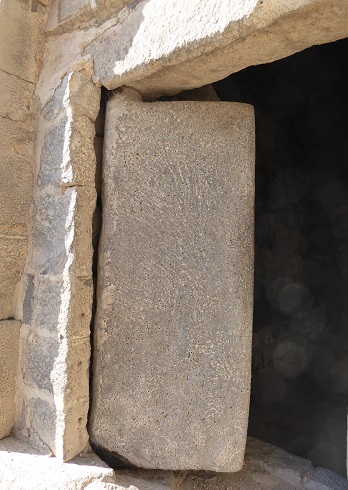 Built originally by the Romans in 200 AD against marauding desert tribes, this too like all the others have been embellished and used by successive powers. Once it boasted elaborate baths, intricate mosaics and frescoes, several wells and reservoirs. Once a focus for the extensively farmed area, most of it lies in piles today. The inscriptions on the basalt blocks and the mosaicked courtyards beg a closer look. But there is a crane onsite and it is in the process of being reconstructed. I can just imagine what it once was and might soon be again. 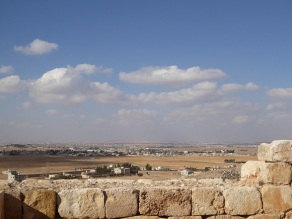 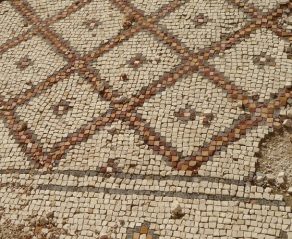 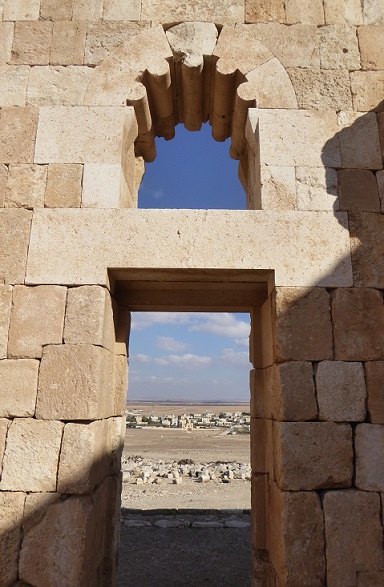