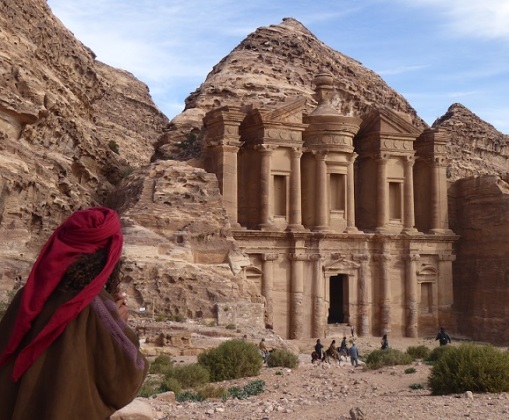 It seems no work of Man’s creative hand,

But from the rock as if by magic grown,

that crowns the hill and consecrates the plain;

But rose-red as if the blush of dawn,

that first beheld them were not yet withdrawn;

The hues of youth upon a brow of woe,

match me such marvel save in Eastern clime,

a rose-red city half as old as time.

The words of John William Burgon written in 1845 evoke images of Petra far better than any I. It is as magical today as it was when this poem was written, indeed as magical as when Petra bustled with the hum of the living more than two thousand years ago.

The origin of Petra is lost in the mists but current theory holds that Arab traders built this city in the fourth or fifth century BC as the capital of the Nabataean empire. Accomplished traders, the Nabataeans grew rich through trade in frankincense, myrrh, and spices and in the first century BC the city flourished. Annexed to the Roman Empire later, Petra continued to thrive until a large earthquake in 363 AD destroyed much of the city. The combined effects of the earthquake and new trade routes eventually led to the downfall of the city and by the middle of the seventh century AD Petra seems to have been largely deserted. Forgotten by all but he nomadic Bedouins it remained a secret until 1812 when it was re-discovered by the intrepid Swiss explorer Johann Ludwig Burckhardt. Following in his footsteps I discover it anew. 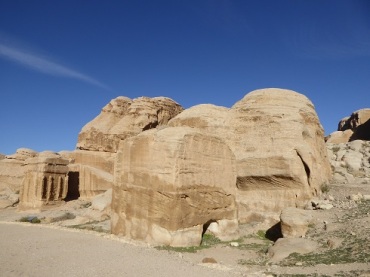 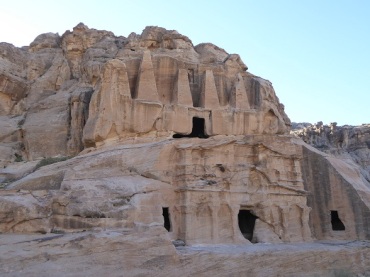 The entrance lies along a path lined by tombs and guarded by gigantic stone blocks dedicated to djinns. Walking through the Bab el Siq, the cleft in the multi-colored chasm of rock brings to mind long-forgotten stories. Of caves full of treasures and shouts of “Open Sesame!” Like the stories, these walls weave their own magic as they close in and widen out periodically. There are stories here as well in the carvings, the sculptures and the tombs that lie scattered along the way. Then comes the first glimpse of the Al Khazneh or the Treasury like the parting of a veil it is a secret slowly revealed. Glowing golden in the early morning light it beckons – come, it whispers, come and see. 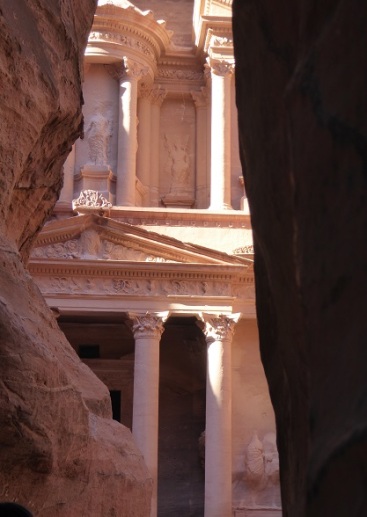 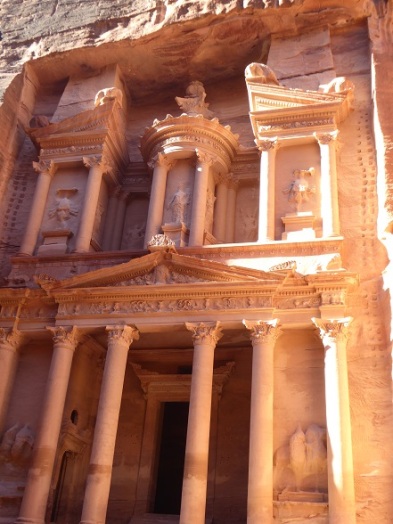 The chasm widens and continues along what is called the Street of Facades. Further on lies the Roman theater and opposite is the beginning of the long line of Royal Tombs. Small makeshift stalls along the way hold the usual kitsch as the stallholders utter the ubiquitous mantra of “cheap price, cheap price”. The camels, carriages and donkeys led by their owners offering rides to the weary add a colorful and frequently pungent dash. Images of the past mingle with the trill of mobile phones, the babble of languages and click and whirr of cameras.

A trail that lead up to the High place of Sacrifice with its eagle-eye view of the area, and a trail leads down behind it to yet more tombs hidden in the creases of these sandstone hills with fanciful names like the Garden Tomb, Soldier’s Tomb and the Garden Triclinium. Some of the tombs have the empty graves, multiple ones in some cases, long since robbed of their contents. Many are the tombs that have become the homes of the local Bedouins. Fitted with metal doors and decorated with carpets and cushions, these homes are surprisingly cozy. 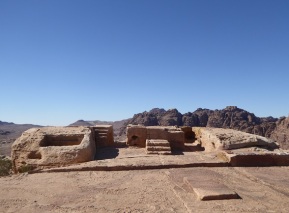 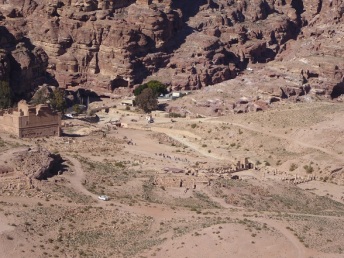 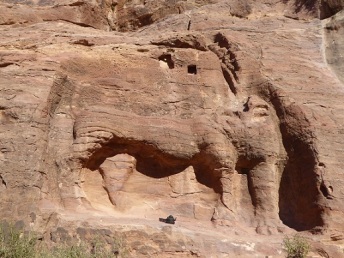 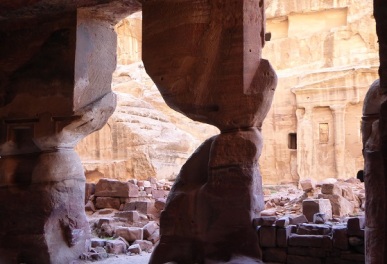 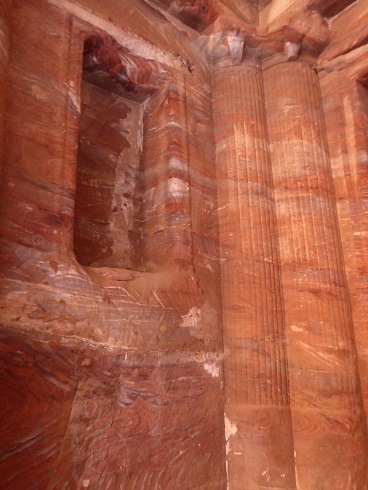 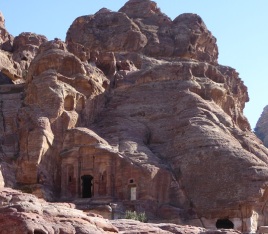 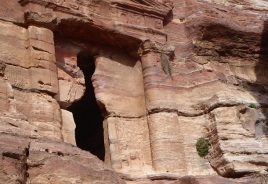 The city center of old Petra with its colonnaded main street and the remains of the Great Temple and Nymphaeum hark back to Roman days. Further west is the old castle Qasr Al Bint, once a grand structure but mostly in ruins now. Just past it a long steep trail leads to the fairly intact building of what is dubbed the Monastery. Some of the structures have a small holes carved out on the floor – a thread of continuity that carries on. The board game that was played two thousand years ago is still played in this part of the world, albeit by a different name. A few minutes beyond it on the trail is an expansive view of Wadi Araba and the lands to the west. 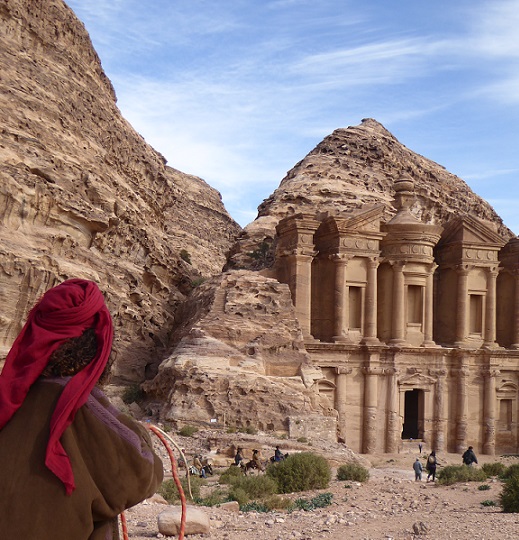 The long line of Royal Tombs stands in stately grandeur at the eastern end. Elaborately carved, they look imposing as they were meant to, dwarfing the line of stalls and people. All have long been emptied of any treasures but in the waning light of the sun they glow gold and amber. 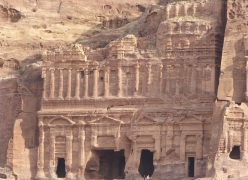 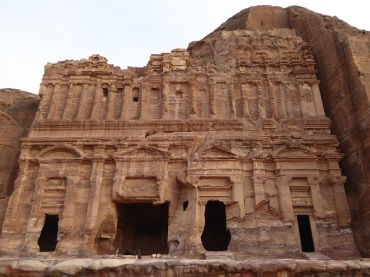 There are yet plenty of more trails, some trod often and others less so. These sandstone hills are riddled with trails and caves. Some of the caves are now home to the Bedouin, some serve as shelters for their donkeys and herds of sheep. But there are others yet that lie in these hills holding into their secrets yet to be revealed.