The road from Matmata to Toujane winds its way through scrubby hillsides with views of small towns and villages all the way east to the thin blue line of the sea. There are goats and sheep being taken to pasture, mostly by young boys but sometimes by men and women. I am in Berber country.

Once a small town, the older part of Toujane staggers down one side of the ravine while the newer part faces it from the other. Its flat-roofed, mud-colored houses give me a sense of deja vue. It looks so like the villages in Tibet and parts of Nepal! 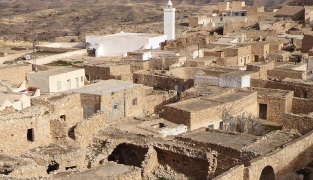 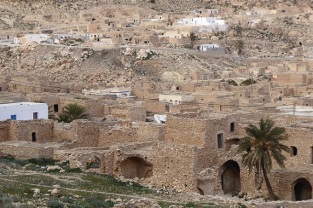 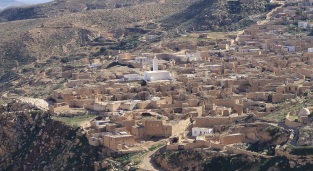 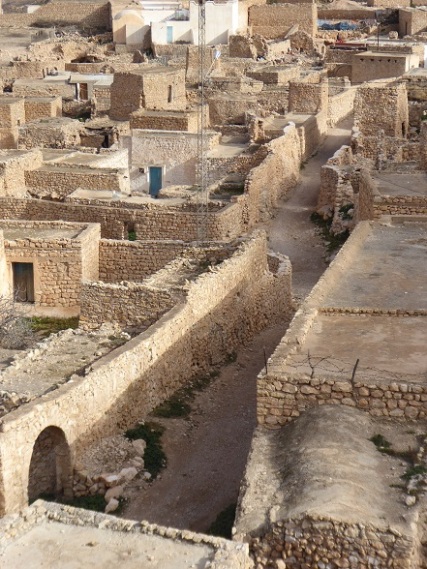 The sense is even stronger when I get close. The old stone houses are mostly in ruins now. But look closely and you find tell-tale lines of laundry, a few newer cement buildings and even some old stone houses painted white. It is in the white-washed houses that people still live. A flash of brilliant color gives away a woman walking through its narrow winding streets. 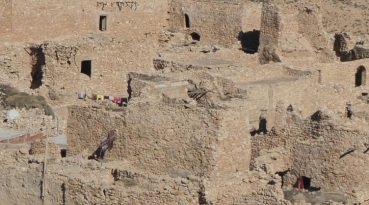 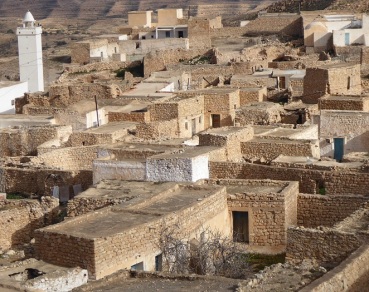 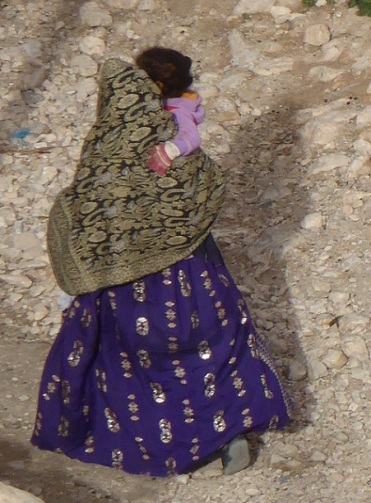 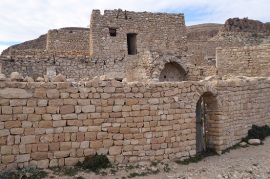 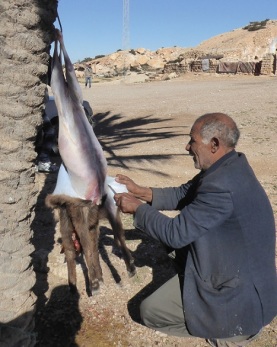 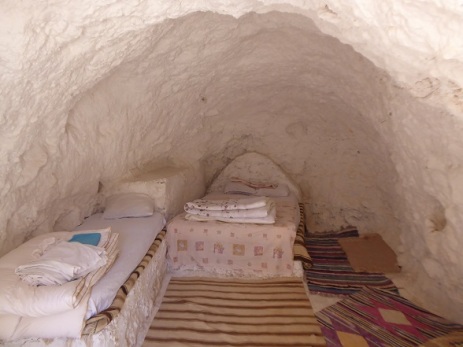 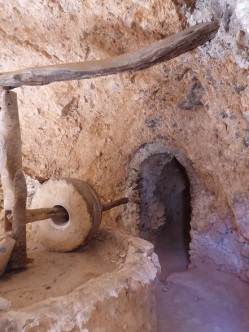 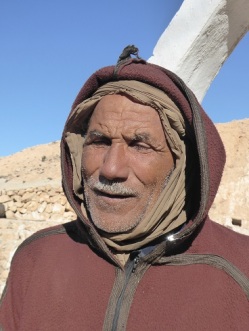 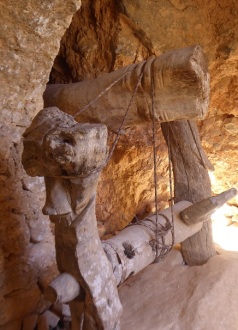 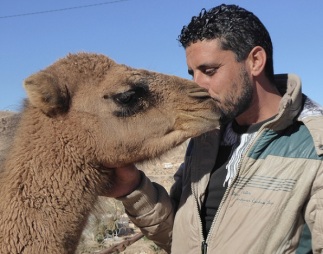 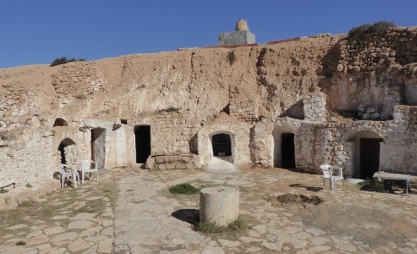 “But we don’t live here anymore” He tells me. My curiosity rears its head and Tarekh laughingly takes me to meet his family. But an introduction to the animals is deemed a necessary first. I meet Mustafa, the baby camel that Tarekh’s newest love while Aicha, the donkey brays a welcome. Then come the goats, sheep and chickens, their home the dilapidated house, once his grandparent’s.

“Do you want to stay in my home?” Tarekh asks. My broad grin and enthusiastic nod says it all. And before I know it, all is arranged; his brother who works in Matmata will pick me up tomorrow on his way here.

Jan 13, 2019
Tarekh’s brother Hasan, is as good as his word and I happily squish into the seat with his mother. She is off to the hot springs today while my backpack and I are dropped off in Toujane. His uncle, aunt and cousins usher me into their house and I am promptly invited to stay. We settle down to tea, oranges and dates and I am introduced to a delicacy. Terfez, a wild mushroom found in the in these parts is truffle-like in taste and texture and they tell me in price as well. Amid much laughter I try on their traditional dress and am startled; it is worn in exactly in the same manner as the Pahari women of Himachal Pradesh in India. Differing only in the design of the brooches. How strange is that? I wonder at the possible connection but haven’t much time to ponder. 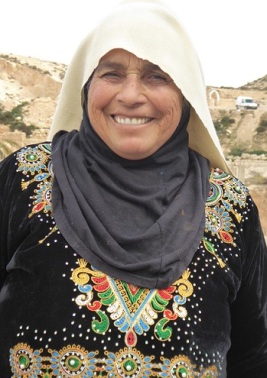 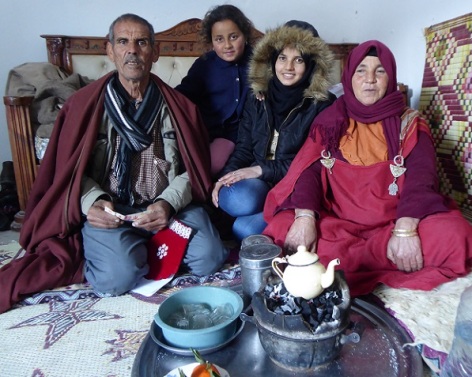 Back at the café, a busload of tourists have turned up. From Sousse, Monastir, Mahdia and other places nearby, they are on holiday and in high spirits. Tea drunk, a couple of men bring out a drum and a tambourine. The tiny cave with barely enough space for five adults, soon sees about fifteen women clapping, singing and dancing to the beat. The party is in full swing and I join in as well, barely able to keep up with the energetic jumping, stamping, and waving as the beat ratchets up. 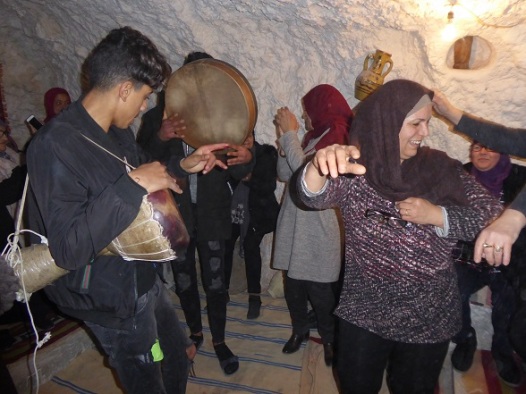 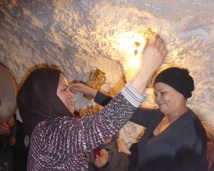 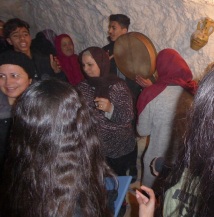 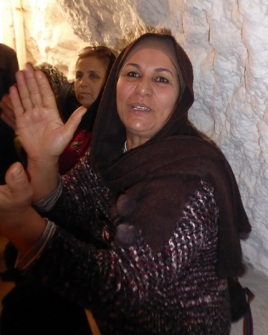 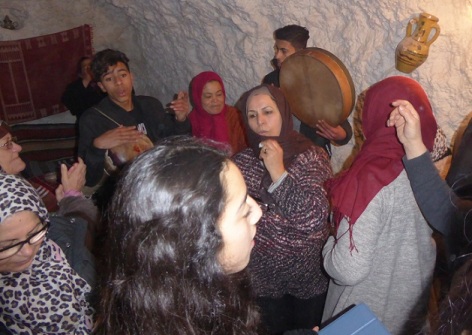 More of the same is in store when later in the day, another group turns up. They have been on a camping trip and are staying in Tarekh’s hotel tonight. Dinner is tastiest meal I’ve had yet in Tunisia, slow-cooked on coals in a built-in oven inside the cave. Bread dipped in olive oil, savory green sauce and spicy harissa complement the meat perfectly. And then we dance. Tunisian songs sung at top volume with clapping and energetic drumming on any available surface is the order of the day. It is a wonder the table and buckets survived until we staggered off to bed in the wee hours. 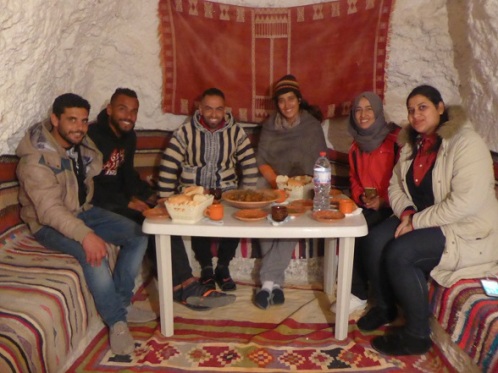 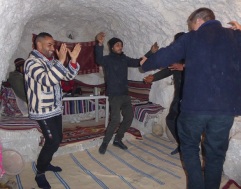 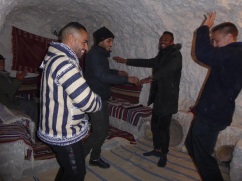 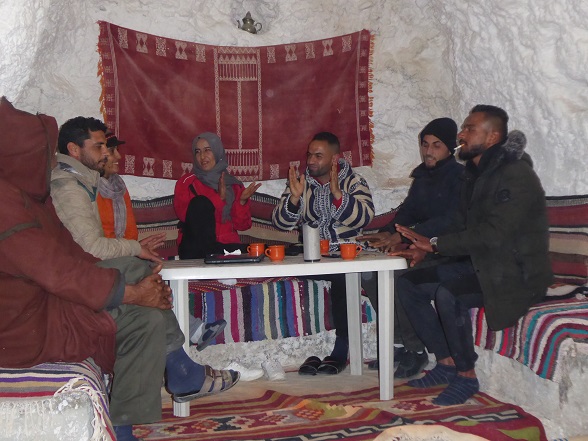 3 thoughts on “A Berber Welcome”