I am in Afghanistan! Duly stamped out by a bored young guard on the Tajik side, we walked over to the Afghan side. A grizzled veteran bid us welcome and asked us to put our packs down. The men were given a short lecture about their lack of chivalry in letting the women carry heavy backpacks. Inside, a smiling young officer with a wee bit of English kept up a constant chatter as he input the details. But it was his colleague, a member of the Interpol police who spoke Urdu and it was with him that I jabbered away nineteen to the dozen. Of the current situation in Afghanistan and who they thought are to blame. Crossing borders usually entails bored, grumpy officers who frown, grunt, stamp your passport and wave you off. Quite different from this feeling of warm welcome!

We even got a little bit of a discount for the car ferrying us to the town of Sultan Eshkashim. The road was a dirt road and we jostled and bumped over it the short seven or eight kilometers. There were rusting carcasses of a couple of tanks and armoured cars lying in the field. Most fields were the bright green of wheat, a long way from harvest. Amid the fields sat houses. The flat-roofed houses of mud bricks that I have been eyeing with curiosity and longing to visit all along the road from Dushanbe. I am here! I am really here! 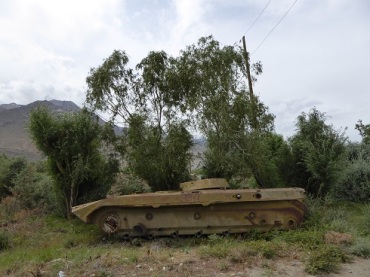 Arriving at the bazaar, we found that the office that would process our permits was closed – today is Friday. A man who spoke good English had materialized and was intent on offering advice. We were the center of unwanted attention.

The couple of dirt streets that comprise the bazaar are lined with cubicle-like wooden enclosures. They were shops, mostly shut but some were open. Sitting and standing around the shops were men and some boys. They were all dressed in traditional shalwars – the loose trousers topped by the loose knee-length kurta or tunic. Some wore turbans, the sort you still see in villages in some parts of India. And some wore the round hats with rolled brim that is typical of this area. There were no women. In the hour and a half we took to find information, change money, we saw a just a trio of them walking past, all in full burkha. Sometime later we saw a young girl also fully covered. It is hard to tell, but she could not have been older than ten! 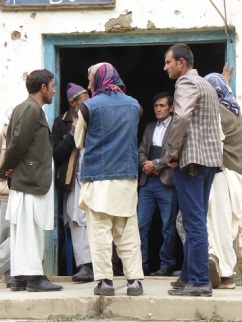 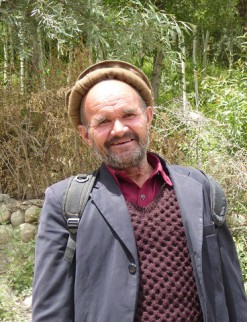 We were a novelty, no matter how unwilling and the men were curious. I had heard that they don’t speak to women or even respond to questions put by women. So I was surprised. My greetings were readily returned and more often than not led to longer conversations. It could be that it was my hash of Farsi/Hindi that made the difference. The shopkeeper did not seem to mind trying on a burkhs, even encouraged it.

Despite the efforts of our self-appointed guide, we went to a guesthouse that a recent traveler had told me about and were welcomed in by Wafai, the owner. Some five kilometres outside the town, across the river, it is inside tall walls, behind tall metal gates. A small garden fronts the house and three rooms lead off from the entrance. The rooms are surprisingly well appointed with beds, a table and chair and even a wardrobe. The largest room is the sitting room with a raised platform covered with carpets in rich traditional red tones. A low table sat in one corner – the dining space. Across from it in another corner sat a TV. It was quite amazing to see the number and variety of channels they got! 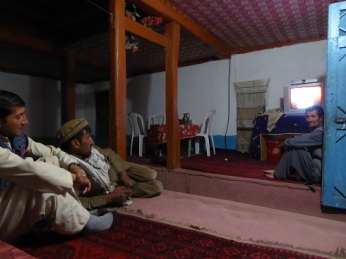 Even more of a pleasant surprise was the dinner we were offered. A rice pilaf with raisins and nuts, some kidney beans cooked with gravy, green onions, naan bread and deliciously sweet watermelon. And green tea to wash it down.

We went to bed early, hoping to get an early start the next day.