Along the Pyanj in the Afghan Wakhan

We were up early to get our permits but it was still noon by the time we got going on the road to the Wakhan valley.  The town of Sultan Eshkashim and its outlying fields soon fell away and we entered the stark moonscape of arid desert stretches bounded to the south by steep mountains.  The Pyanj swept by to our left sometimes sloshing over parts of the road and sometimes dashing against the cliffs several hundred below. Sometimes  the cliffs reached the valley floor abruptly and sometimes there was a long scree covered slope. Sometimes we passed fields of boulders, some the size of small houses. Sometimes there were patches of green – a narrow strip on either side of a rivulet coming down the ravine. The wider ravines sometimes end in a patch of green  and in this patch has sprouted a village. The villages that I had been ogling from across the river, on the Tajik side. They looked just as picturesque up close as they did from fifty or hundred meters away. 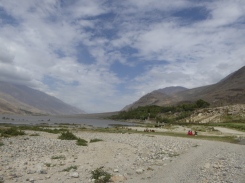 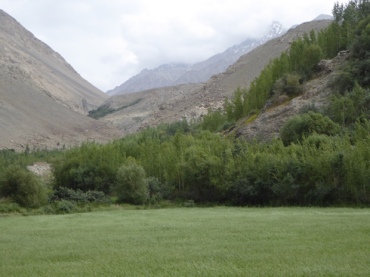 I remember seeing villages like this in Tibet fifteen years ago. These are exactly the same and they blend into the surroundings in the same manner. Almost as if they grow out of the ground. A cluster of mud brick houses,with flat roofs huddle beneath the towering cliffs. Some are large villages with fifteen to twenty houses. Some only have five or ten houses. There aren’t the piles of twigs and branches lining the perimeter of the roofs yet but no doubt there soon will be in preparation for winter. There are more trees here though. Tall poplars and willows dot the village and often line the dirt track that is the road that links the v illages.  Some of the willows are mature trees that arch overhead, to form a green tunnel while some are saplings that have been recently planted. The trunks are wrapped carefully in thorny bushes to prevent cattle grazing on them. Surrounding the houses are fields. Lush green  wheat fields that are many weeks away from harvest lie next to fields of potatoes. Occasionally there are tiny garden plots of lettuce and some greens.  plenty of apricot trees stand among the fields. There aren’t any yaks –  at  2330 m, the elevation is not high enough for yaks. Instead there are herds of sheep and goats. And young children armed with willow branches are the shepherds. 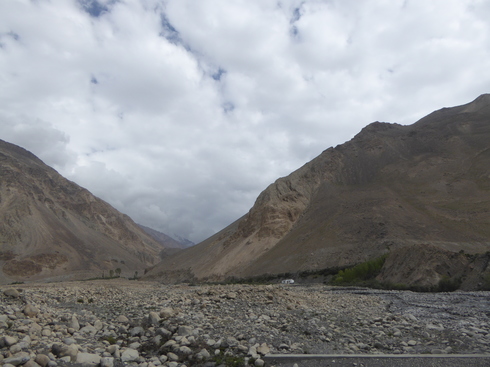 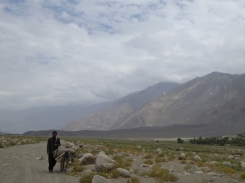 A car on this road is enough of a novelty that we cause great excitement. The youngest ones shriek, clap their hands and jump up and down. The older ones wave frantically, broad grins splitting their faces. The adults too smile and return our waves and yelled ‘ Salaam Aleykhum’. We stopped sometimes, to tie down the loose roof-rack, to check the tires, to coax the car over breaks in the road where a trickling stream has turned into a raging river.

We stopped to take photographs. The people we met were curious, apprehensive, welcoming and shy all at the same time. It shows in the myriad expressions on their faces. These are people that share the same ancestry, the same culture, the same heritage as their cousins across the river on the Tajik side. Yet this is as different as night and day! Life here is as it was perhaps a century ago.

There are no other cars on the road. There are people travelling but on foot or on donkeys. Some men carry a bundle on their backs. Some have donkeys loaded with goods, some carry firewood. More than once I saw people trudging over the scree covered slopes gathering kindling in those tall baskets that are common in Nepal and areas of Ladakh. Some wear the chinese made rubber sandals that are found the world over but many are barefoot. A harsh land and a harsh life these people have here.

But I see only a shy welcome in their faces. With the exception of one village called Khandut, which reputedly has a majority of Sunni population and consequently is similar to Sultan Ishkashim, everywhere else we saw a more relaxed norm. The women were dressed in the loose trousers and tunic similar to the ones on the Tajik wakhan and even when they wear headscarves, these are draped over their heads and tucked behind their ears. I was far more conservatively covered!

Hafyat, who owned the car and rode with us for a stretch had been dropped off at a village and it was the four of us and Abu Sayeed, our driver. Taciturn and a little shy at first, he warmed up to us soon. I was surprised to find that Dari is closer to the Farsi I had learned while in Iran and have been blithely jabbering away to him and to all others. We stopped often and talked to people and took photographs. We stopped several times as well to get our sheaf of permits approved and stamped.

About halfway up the Wakhan lies the village of Qala-i-panja. The word ‘qala’ means fort so this is a village named after the fort of the Pyanj river. In its turbulent past there have no doubt been a fort here, perhaps many times over the centuries. This is an old part of the world that seen many kingdoms come and go.

One of the largest villages in the area, this is predominantly Wakhi. Their language is Wakhi which  related to Dari, but different enough to be unintelligible to Farsi speakers. But there are some in the village who speak Farsi. With such eagerness to meet and talk, language is almost superfluous.

This is Ishmaili country and far from the strictures of restrictive Islam of the Sunni population. The dress of the men haven’t changed much but the women here dress completely differently. The loose trousers have a baggier shape and the tunics on top have taken a more fanciful design. There are plenty of frills decorating them now. Perhaps the most startling are the colors they wear. Bright reds and shocking pinks seem to be the favorites. The biggest difference is the headscarf. They wear a pillbox hat in brilliant reds or maroons. And a  scarf or sometimes just a bit of cloth is draped over the hat. The hair not only shows on either side, but is meant to, given the quick combing that preceded my taking photos.

Walking down the road, I was befriended by a couple of young boys. Exchanging hellos, they surprised me with their smattering of English. They were taking an English course, organized by the Aga Khan Foundation. Every few steps it seemed another child would join us – I was beginning to feel like the Pied Piper! A few were taking English courses and determined to show their proficiency. The leader of my self-appointed guides was Sher Mahmut, a personable fifteen year old.

The smiling welcome greeted me here and now it included invitations into homes. The houses vary in size and space according to the wealth and status of the owner. One of the first houses that I and my ragtag bunch of followers entered was a  relatively humble one. It had one room, barely sixteen square meters that serves as the kitchen, living room as well as storage space. The interior is blackened from daily fire – the only way to cook in these parts. Above the stove is the skylight, the only source of light. The skylight is built in a series of concentric squares – epitomizing the four elements that are sacred to the Ishmaili sect.  Niches are built into the walls for provisions, utensils, ladles and the like. In one corner was a spinning wheel. The woman whose house it was was excited and happy to have a guest and more than happy to give me a demonstration of spinning sheep wool into thread. 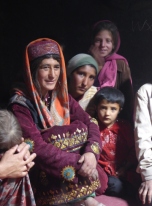 The oven and cooking areas were cleverly designed and made of hardened mud.  Kindling is placed into the depression and lit and a kettle that exactly fits the opening is placed on top. I was invited to tea and gladly accepted. The woman apologized for not having sugar but in the usual Persian fashion, tea was served with candy. Niches built into the walls held utensils, matches and provisions.

The news of my presence had reached the neighbors and a number of them trooped in with their babies and a gaggle of teenagers. They sat around, giggling and shyly posing for my camera. The looks on their faces are priceless! There is  shyness, apprehension, curiosity and sometimes more than a bit of showmanship. Priceless!!

I had yet another treat in store for me. The woman’s son, a young boy is the acclaimed singer of this village. It took no coaxing for him t seat himself behind a harmonium and launch into song. A young man, visiting soon found an empty plastic container and started drumming away. And voila! We had an impromptu concert going.

Later that day I was invited to yet another home, this one much larger than the previous one. The design was the same although more elaborate. The kitchen cum living room consisted of a raised platform along one side. The women sat atop this platform, fishing out large circles of naan bread from the tandoor oven. The tandoor oven’s domed top poked through the platform. Below the platform is the place for the fire. A small door on the side is where the wood is fed in and this is where the kettle for tea is placed. I was beginning to slosh when I walked from all the tea I had been fed! 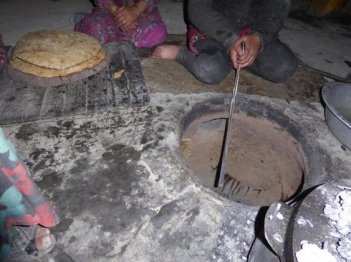 On the other side of the cooking platform was another raised area, this one spread with carpets and a couple of cushions. At one corne, in the pride of place, wa a tiny television set. There is no electricity in these villages. Some of the more affluent villagers may have a solar panel and hence the TV.

I had yet more invitations and promised to visit the next day. It was totally dark when I was courteously walked back to where I was staying.