Dusty, fly-blown and rough around the edges Quba might be, but the welcome its people offer to strangers more than makes up for it. Zero English meant I was dredging up long-forgotten Turkish. Not only did it work, but my attempts elicited grinning offers to sit and have chai. Enquiries for shared taxis at the bazar had one shopkeeper call his friends and then take me to meet a driver who often ferries tourists and commands a grand total of ten English words. Mubariz has a permanent grin on his face, his two gold teeth flashing like beacons. And his stock answer to anything is “no problem”. I had roped in a couple of other travelers and we set out for Xinaliq, squashed in with our packs into the tiny Lada Niva. 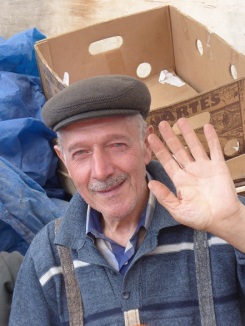 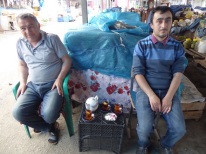 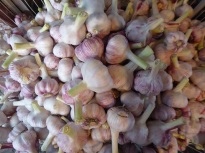 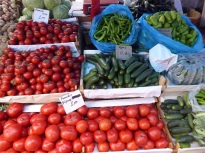 Grim tales of an impassible dirt road are spun assiduously by travel agencies in Baku, but the road to these mountains has been paved since 2008. Only in the actual village of Xinaliq is a 4WD needed. The road led through a forest lined with picnic areas and then came the much-spoken-of gorge. Pretty if not jaw-dropping, the gorge opens up to rolling hills carpeted in deep green. I had not expected it to be quite so green. Dotted with sheep herded by shepherds, it is the quintessential bucolic scene. In the distance is the wide bed of the Qudyalchay river with a few rivulets snaking along, joined here and there by smaller streams. Nestled in the green folds are a few small villages, Xinaliq being the last. The road continues past Xinaliq, to the border with Russian Dagestan, just thirty kilometers away. 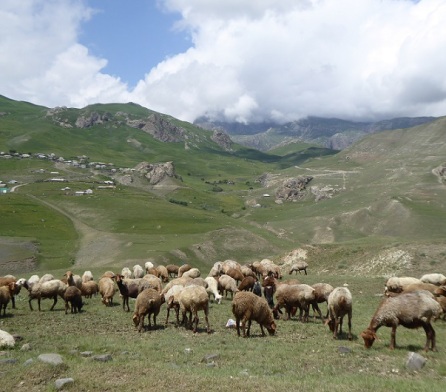 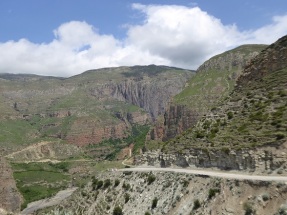 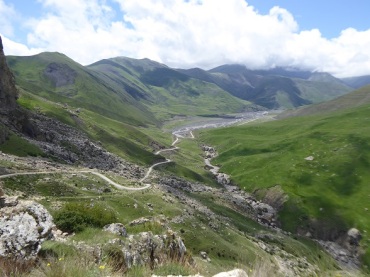 A small hill is the site of Xinaliq, its houses staggering up the steep slope. The roofs are flat but do not seem to be used to for drying fodder or grain as in other such mountain villages the world over. Most of the houses are made of stone and many sport corrugated tin roofs now instead of traditional ones. Since 2006, there has been significant aid sent this way and renovations made to the buildings continue. There are poles leaning at odd angles, sprouting a spaghetti of wires bringing electricity to all houses. Some houses show an innovative use of assorted auto parts but others even have wi-fi. 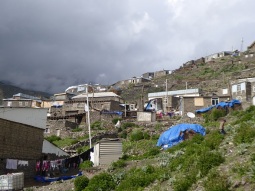 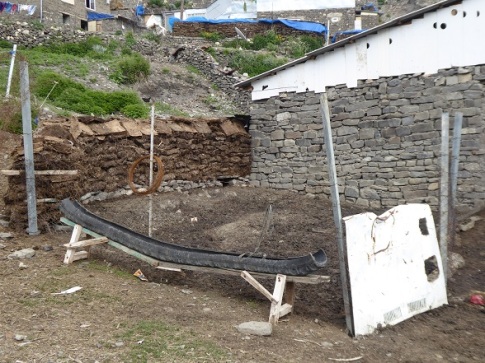 The dirt lanes that go every which way between houses are ankle deep in dung and horse manure making walking tricky, especially after it rains. Chickens, turkeys and the odd hissing geese are as common as human pedestrians. Sheep wool lies in piles in front of houses, being dried while sheep skins hang in some yards. Dung cakes used as fuel are very much a part of everyday and tall walls of stacked cakes line the lanes. Horses are still a common mode of transport although more than one family own a car. Plumbing is still unheard of and toilets are usually next to the stable. Going to one necessitates squeezing past the cows and sheep that have bedded down next to it, praying not to be kicked or gored. 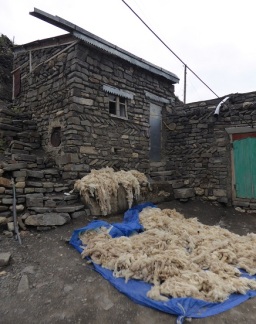 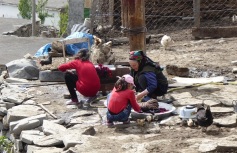 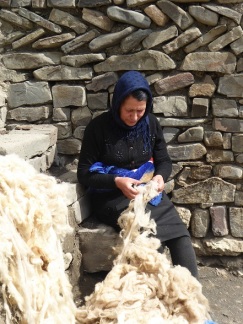 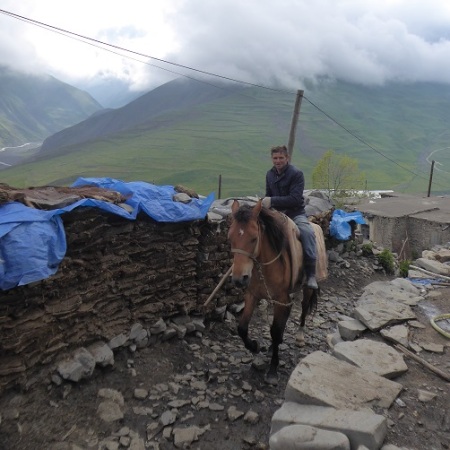 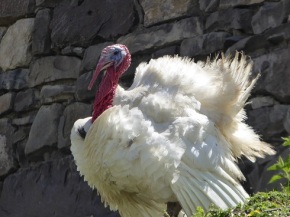 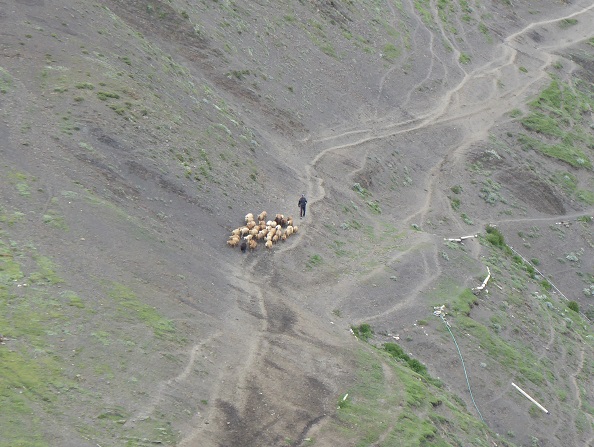 A natural warmth and welcome seems to characterize the people of this village with its ancient roots. So isolated has it been over the eons, that they still speak their own language, Ketsh which has it has its own alphabet. Staying in the home of the village historian, Hajibala Bedelov, we were treated to stories and legends and the history of this area. Fluent in five languages, he may not have formal degrees, but is a true academic. A room showcases his collection of odds and ends spanning a lifetime. It is a museum that betrays his interest in anything from rocks to carpets, from documents to weapons and from pottery to metalwork. There is even a melon-sized lump of meteorite that is as heavy as a solid piece of iron. 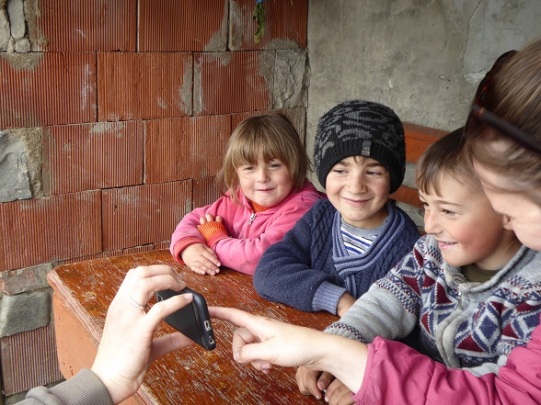 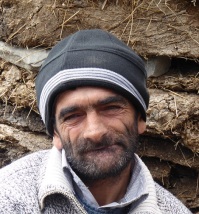 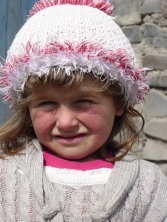 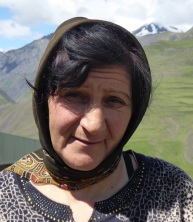 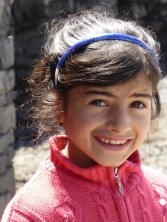 Mr. Bedelov has co-authored more than a couple of booklets on the history of this area and was graciously put up with my incessant questions. When my spotty Turkish failed, he called in one of his neighbors, who spoke some English and our conversation continued. Nobody has ascertained when this area was first peopled but five thousand years seems the most often quoted date. A kurgan not far from this village, yielded a grave of a woman, the burial mound replete with jewelry that reminded me of the designs I saw in the museum in Tbilisi, dating from 3rd or 4th century BC. 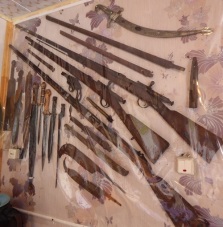 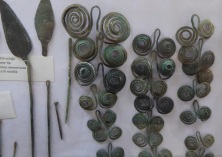 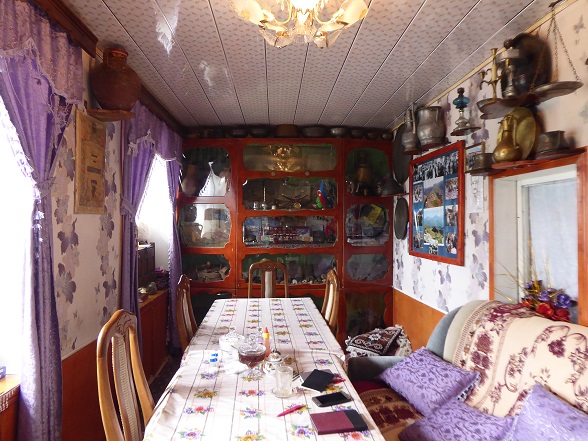 A building that sits at the very top of this hill is the oldest mosque in the village. But long before it was a mosque, it housed other deities and had other worshippers. According to current local theory, this building that has its origin somewhere between 9th and 11th century, but there are inscribed stones used in it that came from much earlier times. Indeed, there are a couple of stones that have intriguing carvings that nobody seems to have researched. Despite the emergence of Xinaliq into the tourist sphere in recent times, Mr. Bedelov claims ethnic groups are largely neglected by the academics in this country and certainly the government. Although the history of ancient scripts in this area from 4th to 8th AD seem well researched, there is a lack of anything beyond.

I was certainly curious and we sat late into the night trying to match it to ancient scripts that were used in this part of the world. Using Google to match old scriots is hardly the epitome of scientific research, but it was fun. Not that we were successful; the inscriptions matched neither Sumerian, nor cuneiform, neither Caucasian Albanian nor any others that we could see. Runic was the closest we could find but neither was it a good enough match. A mystery is was, and a mystery it remains to this day. I would love to know more and have a good mind to go pester the ancient languages department in the University in Baku, if one exists.