Santa Ana may be the second largest city in El Salvador but even its most bustling moments tick in a low-key sort of way. There is none of the frantic pace that characterizes most large cities and even the drivers seem to be more courteous than many others in cities around the world. At the heart of the city set around the Plaza Libertad are stately buildings of the Cathedral de Santa Ana and the Teatro Nacional. The warm yellow columns and façade of the government building hides battered wooden shutters that look down on a lush inner courtyard but the Archeological museum wears a slick face.  A couple of blocks away is the central market with stalls that spill out onto the streets. The vendors call out to buy mangoes and avocados and jocotes and assorted vegetables. One woman juggles handing out change and piping hot empanadas. Another smiles over her cushion of giant sized needles. 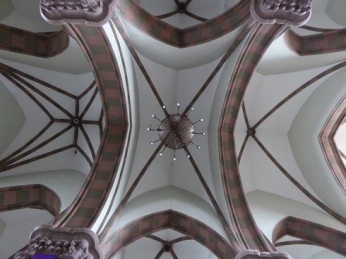 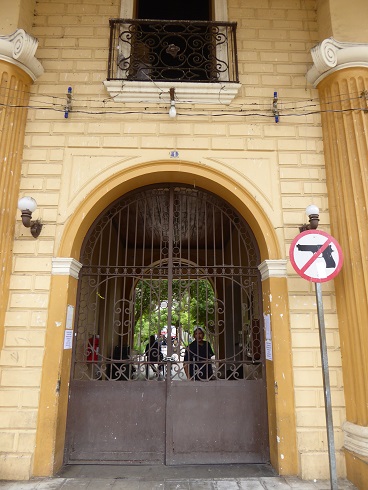 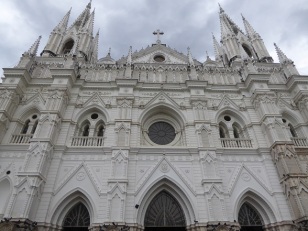 But as daylight wanes they shut down, the stalls wrapped tightly in plastic and tarp. And come nightfall the streets are deserted in the area around the metro centro. Vehicles are few and far between and there is not a single person on foot. The only places that are not locked up tight for the night are the occasional pupuserias.

A short bus ride out of Santa Ana, in the town of Chalchuapa are the Mayan ruins of Tazumal. Excavation work was done mostly in the 1940s and 1950s but large parts of it remain unexcavated to this day. In their wisdom, the original workers plastered over the steps and the sides of the pyramids, successfully ruining the ruins. Underwhelming at best, it takes a bare fifteen minutes to make the circuit and climb the stairs that are accessible.

Next door to the ruins is a large cemetery with hundreds of tombs and we wander among them for a bit. Not surprisingly, many of the graves date to the civil war. Most are family graves, the tombstones bearing the names of several family members. There seems to be no pattern for these graves and they run the gamut from functional ones made of porcelain tiles in all sorts of shapes to elaborate cupolas. Some are so old that the plaster has long fallen victim to time and trees have taken root on the walls and others are as recent as last year. All but the very oldest are lavishly decorated with plastic flowers ribbons and wreaths. 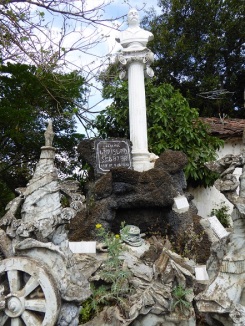 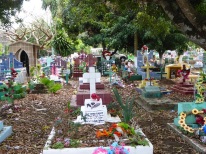 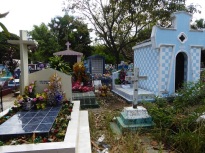