Situated in the coveted fertile areas of the Jordan valley, it is no surprise that this town and surrounding area has been occupied by many a kingdom. Known in the Old Testament as Medaba, it was once part of the Ammonite kingdom before being briefly occupied by the twelve tribes of Israel.

The famous Mesha stele declares it was then taken by the Moabites in mid ninth century BC. Later it was a part of the Nabataean kingdom and later yet by 106 AD, it had become a Roman town. As in other locations, it was transformed into a Roman town with the trademark colonnaded streets and public buildings. The Byzantine period that followed brought with it their own trademark of lavish mosaics. Today Madaba’s claim to fame is the mosaicked map dating from 560 AD. Covering a large part of the floor of St. George’s church, the map is the depiction of the holy lands stretching from Egypt to Palestine. Fascinating it is to try and read the Greek names and associate with them the cities, towns and areas that exist to this day! The Jordan rivers flows into the Dead Sea and the Nile empties into the sea. Jerusalem shows up complete with details of its city walls and gates as does Lot’s cave. Mount Sinai and the northern parts of Egypt makes their appearance as well as does Gaza. 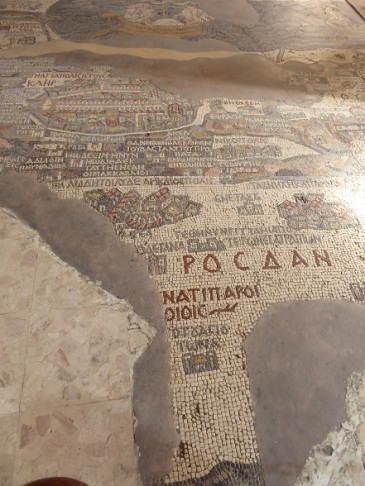 Steeped in history as this area is, the Mt. Nebo where Moses was reputedly shown the “promised lands” is yet another point on the tourist trail. Today on this mountain top is a church with its own share of extensive mosaics. 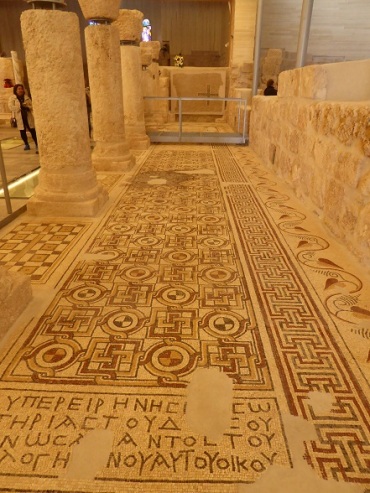 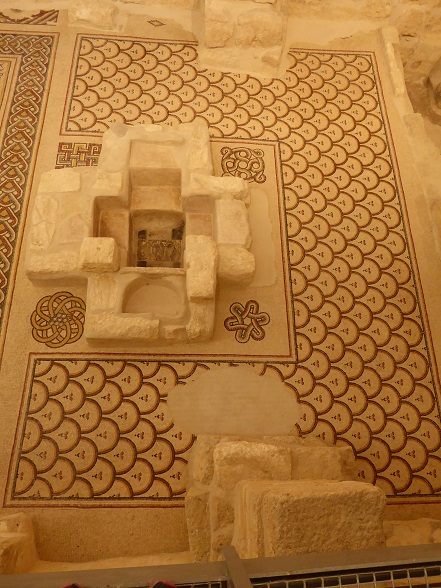 But those are far from the only famed mosaic in these parts. There are dozens of other ruins, some that are marked on the tourist trail and many that are not. Some have mosaics that have been painstakingly restored, and some are yet to be restored. Some lie half-buried in rubble and sand and some lie in museums. Who knows how many are as yet undiscovered in this ancient land?

The ruins at Umm Ar Rasas, halfway between Madaba and Petra is home to the ruins of an extensive garrison town. Hosting multiple churches, it too had lavish mosaics. 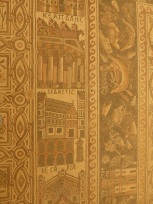 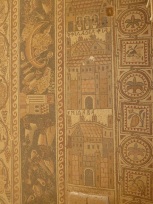 The St. Stevens church boasts an entire floor of mosaics that is if anything, this was even more impressive than the one in Madaba. Not quite a map, it shows the parts of the world that were deemed important at the time including towns and cities. I read the Greek names haltingly and try to match them against the names by which they are known today. Some remain the same  such as Gaza and Madaba. Other cities remain as well albeit by a different name for instance Philadelphia, now known as Amman.

4 thoughts on “A Passion for Mosaics”