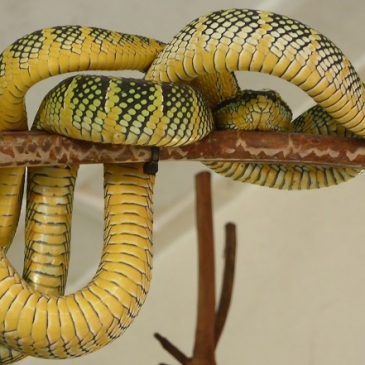 Once upon a time, there lived a Buddhist monk called Chor Soo Kong who had moved to Penang. He was widely revered and known for his compassion to all living creatures, including snakes. When a temple dedicated to him was built in Penang in 1850, legends say that some pit vipers appeared at the altar and made it their home. And they continue to be temple residents to this day, apparently co-existing with the monks with no mishaps. 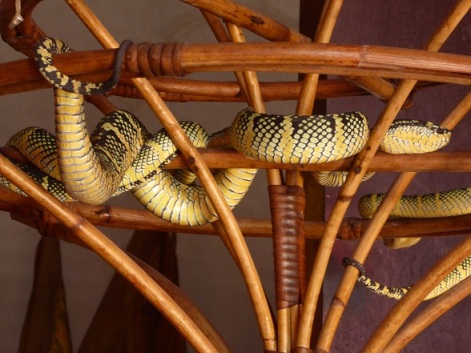 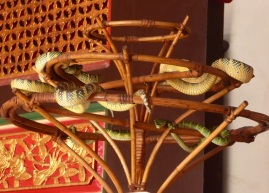 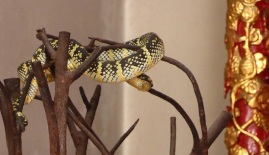 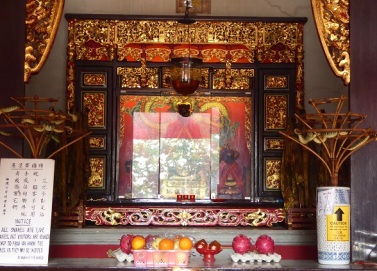 Entering the temple, it looks like any other temple, but once my eyes adjust to the dimness, I see a pair of what looks like flower stands at the altar. And draped on those stands are three or four pit vipers! With a coloring of yellow, green and black they look simultaneously beautiful and loathesome. Fascinated and repelled in equal parts, I stare. And there on the other side, are some more. Next to the temple is an annex and here there even more – on beams, on picture frames, atop railings. There are no glass partitions – they apparently crawl and park themselves wherever they wish. They doze within touching distance, certainly within biting distance. A particular one, carefully marked with red paint has been de-venomed and is the unwilling participant in photo shoots. The three large boa constrictors that share a big glass case seem equally resigned to the few tourists that opt to have photos with snakes draped on them. 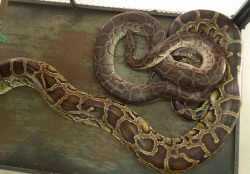 Outside the building is a small garden enclosed by a chest high wall. Bright red rose-apples hang in clusters on the two trees and plenty more litter the ground beneath. The fruits are apparently safe from humans and animals alike; the resident guardians are yet more pit vipers. Draped on branches and coiled around trunks, are literally dozens of vipers. Half hidden by the leaves, they are playing a game of spot-me-if-you-can, no doubt. 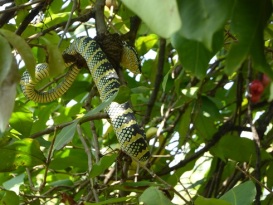 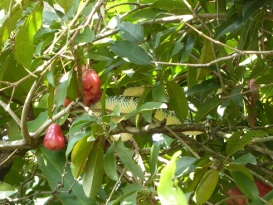 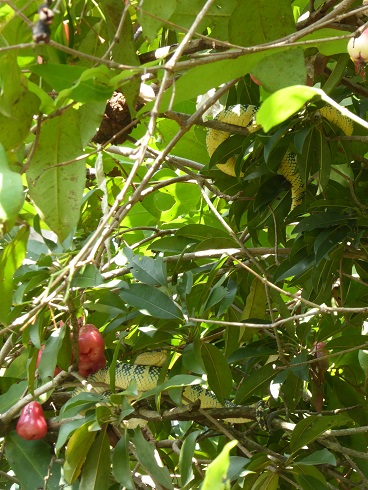