Traveling on the Trans-Siberian – the very idea has me grinning like a fool. Half-forgotten photos, movies and stories from books go flying through my mind. And now, I really will be on it. Packed up and eager to get there, I start off with loads of time to spare. I had already bought the tickets days ago, in Moscow and all I had to do was get to the station.

Locating the place to buy tickets for the Trans-Siberian and managing to do so by brandishing my all-of-a-dozen words of Russian had been easier than finding the correct station and the correct train. Far more disorganized than the Leningradsky station, it takes talent to find one’s way in the Yarolovsky station. Talent that I clearly lacked. Having met with rudeness from a pair of provodnitsas, I threw myself at the mercy of a local woman, who looked like a passenger bound for some train herself. I have been doing this since arriving in Moscow, usually aiming at younger people who are more likely to speak English. But I don’t discriminate – all are equally likely at risk to have my Lonely Planet guidebook thrust under their noses and asked to point me in the right direction. It generally worked and did so now as well.

It is almost eleven-thirty at night and we should be about to start. I had hauled in my pack and just settled in when I met two of my fellow cabin-mates. Samuel and Jerome are from Switzerland and are travelling for three weeks. They intend to travel through Russia, Mongolia and even Beijing. In three weeks! Just the thought of it has my head spinning, but to each their own, I suppose. I had hoped to share the cabin with locals but for reasons that I cannot fathom they seem to put all foreigners together. Note to self: buy the platskartny next time. 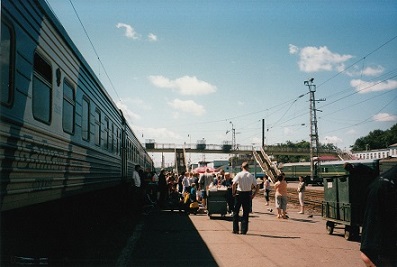 I have been glued to the big picture window since the train started. The land outside is flat as far as I can see. Lush green grass and bushes carpet the areas near the tracks, dotted with nodding wildflowers in shades of purple, blue and white. Further back are some stands of birches and beyond those, the tall stands of evergreens that form the edge of the Taiga. Unending, it seems, mile after mile it stretches. So this is the Taiga. Wow, I think, drinking it all in. This immense area stretching from the Arctic circle down to latitudes of fifty degrees or so, are a belt of pines, spruces and larches. I am looking at the southern edge of this vast area. A dense green, almost black in parts, they seem fascinating. For some odd reason, I find myself thinking of Grimms’ fairy tales.

The image of the fairy tales seems to fit in with the occasional villages that are nestled in some clearings. The small clusters of wooden houses are an unpainted dark brown, not the brightly painted ones that I saw in the Vernisazh market in Moscow. These are humbler dwellings, their roofs made of corrugated iron, steeply sloping in some, shaped like a barn roof in others. There are small plots in front of the houses, and occasionally I can see someone tending these gardens. Kitchen gardens, all of them, they march in neat rows with military precision. The roads maybe asphalt for some main ones, but most are dirt with pools of stagnant water. This is a far cry from glitter and brashness of Moscow and even further from the ostentatiousness of St. Petersburg. Life here can be grim and no doubt is. I wish I had thought to break the journey and visit some of the places in between when I bought my ticket.

The train moves on, stopping sometimes to let other trains go past in the opposite direction. Most are freight trains that trundle by in a long chain of containers. Some carry timber, the huge long piles streaking past the window in a blur.

Outside the window is the taiga again. Unvarying, seemingly unending, verging on the monotonous. The wide open gray stretches hold nothing of appeal either. The idea of several days on the Trans-Siberian has that tang of romance that is irresistible, but in reality it palls quickly.

But we have another cabin-mate today. Alexander, or Sasha as he likes to be called, is Russian. He is eager to show us foreigners, his version of Russian hospitality. Our lack of Russian and his lack of English did not exactly make for smooth conversation, but failed to curb our enthusiasm. With Jerome’s dictionary, a few sputters of our pooled phrases and vigorous miming, sometimes supplemented by drawings in my journal, we did just fine.

His work involves machinery – of what kind I failed to understand – and is located in distant Salekhard, on the edge of the Arctic circle. But his home is in Krasnoyarsk, where his family lives. He obviously dotes on his daughter, sixteen year old Elena. He proudly informed us that she was learning English and French and could no doubt speak with us fluently. Next time I come, he told me, I should stop in Krasnoyarsk and visit them. I could take a boat down the Yenisei and sail from the southern edge of Russia to the Arctic. Intriguing thought – it joined other such river voyages that are some of my pet dreams. The Yenisei had never before featured in my daydreams but who knows? Maybe I shall someday, I thought to myself.

At one of the stops Sasha hopped out, and in the brief minutes-long stop at the station had managed to procure a bottle of vodka. How he managed to find it, when there was were no shops, no people, literally nothing on the platform, is anybody’s guess. But find it, he did and nothing would do but for us to have vodka, Russian-style, as he called it. A little later, at yet another stop, he hopped out again and came back with some chocolates. Thereafter we were tutored in the fine art of downing a shot of vodka chased by chocolate. The smoothness of our conversation was directly proportional to the vodka imbibed. Toward the end of the evening, we were eminently fluent, verging on eloquent. 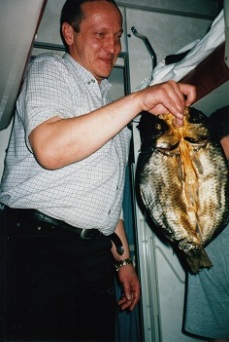 I have had quite enough of the Taiga. I shall be happy to step out at Irkutsk but not before another treat that Sasha has in mind. He insisted on treating us to a meal today, not only Russian-style he said, but specifically from the area near his hometown. He disappeared at some station, looking for who knows what.

Whenever we stop at a station, there are elderly women selling food. The Babushkas carry baskets of homemade foods, usually breads, perogies, salads doused in mayonnaise, boiled potatoes and sometimes tomatoes. I have no idea where Sasha came by it, but he entered the cabin with two huge fish, as large as platters. The fish in these parts are split down the middle, salted and dried. The prescribed method is to tear off strips of fish and alternate it with a chunk of potato. The boiled potatoes are garnished with scallions and complement the salty fish well. And of course Russian-style it cannot be unless shots of vodka accompany each bite. I was not at all sure how much longer I could take Sasha’s version of hospitality! The all-pervading fishy smell did not endear us to either of the provodnitsas, nor did the hilarity that accompanied our lessons on “Russian-style”.

Sasha left but Samuel has now taken up travelling “Russian-style”. He must have also taken lessons on acquiring things Russian-style, because he came swaggering in with a bottle of vodka.  Having barely survived Sasha’s Russian-style 101, I wisely declined Samuel’s offer. We chatted a bit, made a desultory effort at playing cards and I scribbled in my journal most of yesterday evening. Those two were still in their bunks snoring off the remnants of vodka when the train came to shuddering stop at Irkutsk this morning. They get off in Ulaan Bator which is another couple of days but I get off here.

Oh, happy, happy, joy, joy! I am just as eager to get off as I had been to get in. ‘Tis easy to develop cabin fever on a Trans-Siberian, methinks. To think I had been fondly imagining a journey all the way to Vladivostok. Yikes!