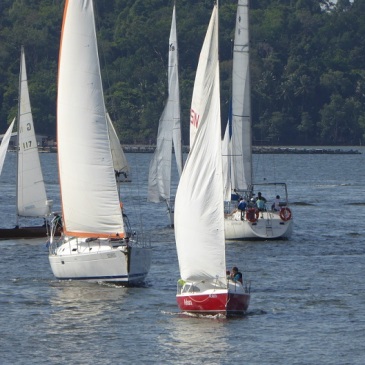 A few clouds marched across the blue skies above and now and then, a breeze sent them scudding. Painfully bright sunshine shone down on the waves lapping at the beach at Changi Sailing Club. A hum of excitement wafted across the club as the crews got their boats ready and tinkered with last minute repairs. It was race day. Teams formed amid an air of friendly competition as people headed down to the sailboats for the last race of the season. Sailboats of all sizes and a few catamarans drifted this way and that, jockeying for position near the yellow buoy which marked the start of the race. 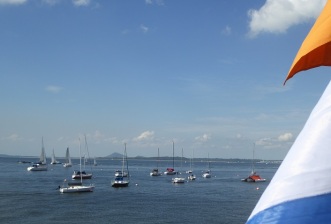 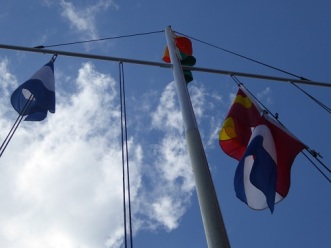 I had had an introduction to sailing the week before. This time around, invited to sail on one of the boats, I figured prudence was the better part of valor and declined. Instead, I had appointed myself photographer of the day. At the head of the jetty is the crow’s nest, where the staff hoist the flags and clock the times of the boats. Up the ladder I climbed to this platform.

A blast on the foghorn to my right, had me jump a foot, to the amusement of the staff. And had a narrow escape from an ignominious, unplanned dive into the waters below. Little did the staff realize that were it not for the sturdy railing, they might have been treated to far more entertainment. The race begins, I thought, frantically getting my camera ready and getting into what I thought was a very professional-looking crouch. But that was merely the ten-minute warning to the start of the race, not the signal for the race itself. One of the members, with three boys in tow were just setting off in a motor boat for one of the sailboats – clearly it had not begun yet. Another blast and I leapt into position once more, focusing the lens. But no, that was not it either. And so followed a few other blasts along with raising and lowering of some of the flags. A string of numbers and phrases followed, spoken over the radio, presumably to the waiting crafts. I listened intently but all of it sounded Greek to me. In between they gossiped about the various boats. I understood nothing but some of the names of boats. Mention of one particular boat dubbed Capsize King and the guffaws that followed had me grinning as well. I had become more or less inured to the blasts of the horn by now. Predictably of course, when the actual race began, I was nowhere near ready and barely managed to snap some photos.

Off went the boats, their sails upright, their hulls cleaving cleanly through the water. The white sails filled out and they glided on the sparkling blue waters. A pretty picture they made, with sunlight glinting off the water. They glided one way and then the other, completing the figure eights that was the course set for the race. They leaned into the wind and away, some of them far enough that they seemed to be a hair away from capsizing. But none capsized; Capsize King was either not racing that day or its crew had improved tremendously. 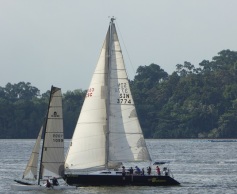 A couple of hours later the race ended; blasts from the horn announced each boat as it crossed the finish line. It had been a good race and the celebration that followed was boisterous. We  trooped up to the bar to applaud the winners and ring in the last race of the season to the tune of a splendid sunset.