King Solomon has heard of the Queen of Sheba and her great kingdom and she in turn has heard of him. So she travels to his court along with a large retinue carrying gifts of frankincense, myrrh and gold. The Queen tests Solomon’s wisdom, asking him many questions and giving him riddles to solve which he answers to her satisfaction. The Queen stays with King Solomon as a guest but warns the King not to touch her, so the story goes. He agrees on one condition. That in exchange she should not take anything of his. But there is a trick involved. In the middle of the night the Queen is thirsty and drinks a glass of water thus breaking the agreement. The King now claims her and they spend the night together. On returning home the Queen gives birth to her son Menelik and brings him up on her own. As a grownup, Menelik desires to know his father and travels to Israel to meet King Solomon. On his return, he brings with him the Ark of the Covenant, the sacred container that contained the Ten Commandments. Such are the myths and legends that surround the city of Axum.

Situated in the northeast of modern day Ethiopia, Axum sits on a high plateau next to the Red Sea. The ragged, scruffy edges of present day Axum belie the ancient civilization whose roots date back to 100 BC when this city was wealthy from trades in ivory, exotic animal skins, and gold.

The sprawling structure a couple of kilometers to the west of town amid some empty fields is labeled by the locals and more vociferously by the tourism board as the Queen of Sheba’s palace. The fact that that would put it at roughly 950 BC while the structure itself can only date from sixth or seventh century AD is usually brushed off as a pesky detail by locals and guides alike. I walked past some fields studded with upright stones like a mini Stonehenge, past the long line of a camel caravan, across a scruffy field toward the extensive building that was likely the house of a noble or a rich merchant. I wandered among the ruins watched by a mangy dog and a pair of goats. There were no other visitors. 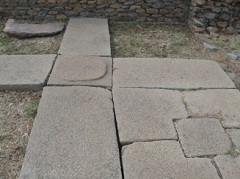 Then rectangular complex stretches some forty meters on each side, guarded by stone walls half a meter thick. The imposing front room has an open three-sided stone staircase leading up to a flagstone floor. The flagstones seem to be set in a definite pattern with two slightly raised platforms – one a square and the other a circle. What were they for? And why the different shapes? No guidebook seems to have an answer. An empty niche in the center of the back wall seems appropriate for a throne or a seat of importance. The complex has numerous rooms, mostly leading from one to another but occasionally dead-ending. The roofs have long disappeared making it easy to see the general plan from a platform built to view the structure. 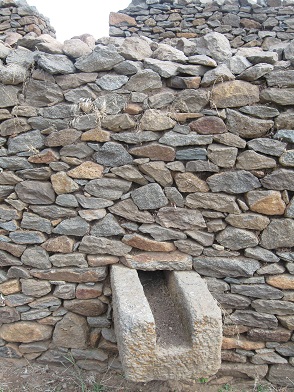 There are some stairs that lead to nowhere indicating a second storey that no longer exists. There are raised circular well-like structures that may have been storage bins or perhaps for waste. One large room set at one corner of the complex still boasts a huge brick oven with small enclosures on either side of it forming storehouses. More than one room has the same odd structure in it – a large flagstone set in the floor, shaped like a rectangle with arms. What is it? What is its purpose? Intriguing as the complex is, far more intriguing is the fact that only two percent of these ruins have been excavated so far. Imagine all that yet to be uncovered. What tales might they tell?