I did not have to look for a bus or a ride to the border; Bilal and Mustafa both insisted that they would take me and they did. Early in the morning they arrived, I hopped into the van and rode to the border. But first we had to stop at the village where I had been a day before – I had a few small things to give to the family we had met. A round of photos and fond farewells later, we went up to the border. 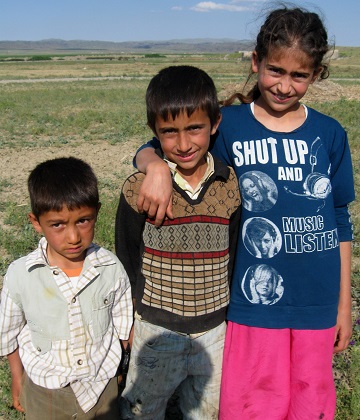 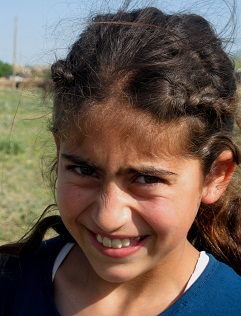 A long line of trucks were parked along the way, waiting to enter Iran. I asked why they waited but got a garbled reason involving duties and weightage – convoluted reasoning that did not make much sense to me. We however did not have to wait. Mustafa apparently has friends and we cruised on and reached the gates. I was a little nervous and not exactly sure what to expect. There were no other tourists or travelers of any stripe, nor were there any other foreigners. The much-touted Iranian elections were around the corner and no visas were being given at the border. All sorts of dire scenarios ran through my head despite the assurances of Mustafa and Bilal and my own stern admonitions to myself. What if my hejab was deemed not quite right? Should I have bought a chador? But how does one wear a chador and a backpack simultaneously? The two are mutually incompatible! We said our farewells with fond hopes of meeting again amid hugs, waved goodbye. With Mustafa’s and Bilal’s good wishes ringing in my ears I walked across the paved walkway into the Turkish immigrations. The guard at the post clearly knew Mustafa and added his assurances as he waved as well – with his AK 47 in his hand. 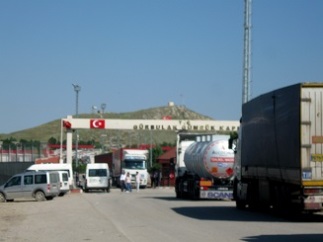 At nine in the morning, the Turkish side had a few people, most of them merchants with boxes, and cartons of various sizes and shapes, some apparently with questionable contents. The hall reverberated with arguments about the sizes and contents and requisite duties to be levied. What constitutes dutiable goods and the duties to be paid are apparently negotiable. Who knew?
My passport duly stamped, I was waved onward impatiently by the sole harassed officer. The man ahead of me had his passport stamped and then had turned around and walked back to the Turkish side. The officer unable to leave his little cage-like enclosure, yelled for someone to go fetch the man. In a loud grumble, meant for all to hear, he went on to say that all those with an exit stamp had to go to Iran; it was a one-way system. The sound of curses liberally sprinkled the air as I walked on.
The Iranian immigrations were housed in the same cavernous building, but across an open patch of land. One of the officers smiled and waved at me to precede him. The path was a caged corridor – metal bars and iron grills that funnel you on. Interspersed within this metal framework are cages – for the superiors of those without any cages of their own. I was never quite sure where the actual border lay. I had to show my passport several times. The pimply-faced youngsters in military uniform apparently did not know enough to hold up the passport the right side up. The severe, dour, assessing looks they had on their faces failed in its impact as I tried to smother a fit of giggles. Their officer, ensconced in his own cage had to be told “Hindustan” because he could not understand ‘India”. Finally I came to the actual Iranian immigrations.
I received an almost-bow and a smile from one man as I was waved to a chair on one side. “Please wait” he said and disappeared behind a door.
A second later a woman came out of an office marked “Tourist”. Draped head to toe in unrelieved black, clutching the edges of her chador in one hand, she ushered me into her cubicle and bade me to take off my backpack and make myself comfortable.
Why, I wondered. Was this going to be a long interview? Shouldn’t they just stamp my passport and be done with it? Was it a different procedure in Iran? But I need not have worried.
Speaking perfect English, the officer asked if I would like a cup of tea. It was apparently a rhetorical question because a cup balanced on a saucer appeared at my elbow as did a couple of sweets. She smiled, took a seat, sipped from her own cup and asked if this was my first visit to Iran. I had shaken off my dazed state by the time the questions turned to where I lived, my profession, the name of the university where I teach and the length of vacation I had. If this was an interrogation, it was so well camouflaged that it felt more like a friendly chat.
She asked my reasons for visiting Iran and especially the two-month long visa that was not at all the norm. I explained how keen I was on history and culture, especially ancient history of this country and she nodded and smiled, saying our two countries have a lot of shared history and the cultures are well.
“You will see” she smiled, as she stamped my passport, looked up the current exchange rate, offered me a map and even gave me her email, just in case I ever needed help.

Since when do immigration officers offer tea and email addresses? Isn’t grunting and stamping passports with a frown the usual procedure? I’d have thought that that was in their job description. But not in Iran apparently. I made a comment to that effect which had her laughing.
“But why should that be?” she said.
“We are happy that you choose to learn about our country and we welcome you here.”
So, I thought, this is Iran and walked out with a warm feeling of anticipation.

That warm fuzzy feeling disappeared immediately on emerging. The empty cavernous feel of the Turkish side was diametrically opposite to that of the Iranian side. Crowded with people, touts, business men and merchants, I was instantly engulfed in chaos. Several touts swarmed up to me with vociferous demands of “change money” and several other demands that I did not understand. But I had protection. One of the customs officers noticed my dilemma came forward, brusquely waved off the touts and took me to the exchange office. One of the more determined money changers had tagged along in our wake and in the end my transaction was done with him. The helpful customs officer looked on, sagely nodding his head at the rate I was quoted. No, I insisted, I did not need to change a lot; just enough to get me into town.
“Okay, okay”, said the grinning money changer, hands up in a pacifying gesture.
“Good rate in the town. Here, not so good” he said with disarming honesty.
“Yes, I know” I replied smiling and he took off making a beeline for the next potential customer.

The next hurdle was haggling with the taxis to the bus terminal in Maku. There was no shortage of touts here either and after a couple of false starts, I found a taxi. The helpful officer at the immigration had told me to bypass the touts and head straight for the line of yellow taxis. In the middle of the melee, battling the intense heat and the crowds, trying to ensure my hejab stayed on, I had momentarily forgotten her advice.
An older man with a gentle way of speaking, the taxi driver pointed out interesting places as he drove me to the bus terminal and offered to come in and see me onto the bus. Since when are taxi drivers this solicitous? Apparently in Iran. And soon I was on the bus to Tabriz. 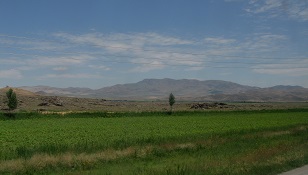 The scenery out the window was a palette of browns, beiges and reds. Barren hillsides of rock and sand lay baking in the heat. Here and there were pockets of virulent green of well-tended fields. Low stone walls surrounding apricot orchards flashed past the window in a landscape that was eerily reminiscent of Ladakh. So this is Iran, I thought. I couldn’t wait to begin exploring.