Arriving late in the evening in Malaga, I had been a little apprehensive about walking into the city center but I need not have worried. The streets were busy including families with small children and women pushing baby strollers.

Even better was the friendly help I received when asking for directions including a couple of times when the enthusiastically offered advice sent me off in the wrong direction. No matter; I just saw a little more of the city than originally intended.

The compact center  of old Malaga boasts a multitude of plazas that are connected via walkways. Some are wide enough for vehicles but many are narrow walkways paved with flag stones, meant only for pedestrians. And pedestrians there are aplenty. Word is that Malaga is a much maligned, least visited tourist destination in Andalucia. But there are literally droves of tourists wandering the streets, dining at restaurants, browsing through the shops. The city feels like a strange mix of typical Spanish town and a shopping mecca. 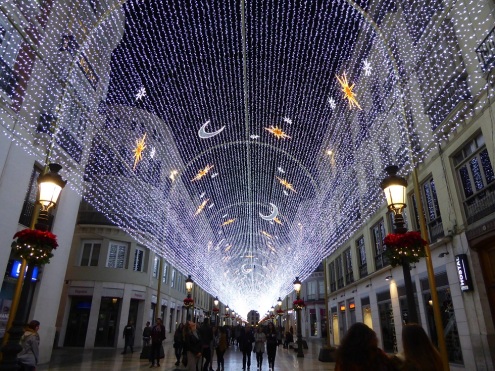 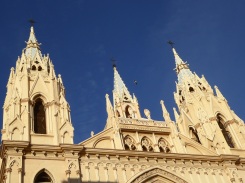 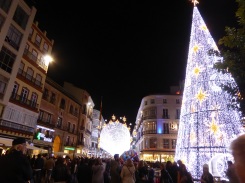 Home of Pablo Picasso, the city boasts a museum dedicated to the artist as well as dozens of art galleries and shops. But this city has a much older past. The remains of a roman amphitheater graces one corner of the city and the fortress of Alcazaba, dating from the 11th century Moorish period gazes down on Malaga from its perch above.

The plazas and streets are dressed in Christmas glitter in the form of over-the-top light displays and there is a carnival-like feel to it complete with mimes and jugglers. Musicians set up in small squares and the staccato beat of flamenco peppers the air. A band is booming and trumpeting its way down those narrow streets, the sound ricocheting off the walls. As it goes winding its way through the serpentine streets, it gathers followers. But none dance to the music; they follow in orderly lines. 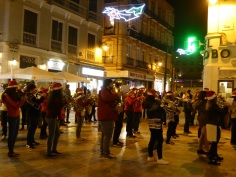 The the bars and restaurants are crowded and in some bars the locals burst into impromptu songs, the decibel level in direct proportion to the drinks consumed. These are flamenco as well, the singing accompanied with clapping and stamping.