Rising in the far western corner of Zambia, the Zambezi thunders through Angola, skirts Namibia, Botswana and Zimbabwe and curving its way through Mozambique finally empties itself into the Indian Ocean after more than twenty-five hundred kilometers. Somewhere along its journey is a place that the natives of these parts have long called Mosi Oa Tunya, or the Smoke that Thunders.

Such was the tale heard by Dr. Livingstone. Set on the task of finding the source of the Nile, he had been travelling through this part of the world for a few years. In a canoe, guided by natives he arrived at an island on the river just before the waters leap down a vertical depth of more than a hundred meters. Landing on the island, he lay on his stomach on the lip of the falls and looked down into the seething cauldron beneath him, getting drenched to the skin in the mist. 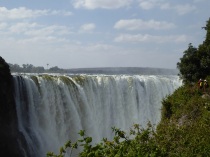 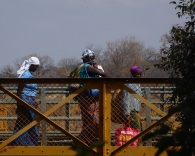 So moved was he by the sight that he wrote in his journal that this was a scene that must be gazed upon by angels in their flight. And such is the sight that greets every visitor to the Victoria Falls. Stretching more than seventeen hundred meters across, the waters of the Zambezi leap down in a vertical seething, tumbling, swirling curtain. Falling a depth of more than a hundred meters, the sheer force of the water makes spray rise up to almost ten kilometers creating rainbows in the mist. It is not merely mist that sprays the visitor. Walking along the pathway that runs along the edge, I am drenched as if I have been standing under a forceful showerhead. It is a sight that awes, drenches and deafens.