I had reached Livingstone, a tourist mecca of sorts – at least by southern African standards. Predictably none of the standard tours interested me. Instead I wanted to go stay in a traditional village – the sort I had been seeing from the bus windows. Asking at travel agencies and hostels elicited the sort of looks that clearly stated I was missing a few gray cells.

“It is very simple madam,” said one aggrieved person, enunciating slowly and clearly – those missing gray cells no doubt.

“If you are a volunteer, you stay in a village. But if you are tourist, you should be on a tour.”

But mulish stubbornness being a congenital trait, I started haranguing locals next. And voila one of them said he came from one such village, not too far off. Malambo’s grandparents still live in the village and despite obvious reservations about my request, he agreed to ask his grandparents. And it was all set.

The next day we left, reaching Mukuni after a couple of combie rides. A sprawling village set on rust-red sandy soil, this village is huge! A spaghetti of sandy lanes run hither and yon and family compounds seem to spring up like mushrooms after the rains. Each compound belongs to a family and is surrounded by a fence made of either thatch or a hedge of some kind of cactus. Each compound has only one entrance with a door. Some of the doors are made of thatch, some of broken bed spring and some old tire rims, bits of a metal from drums held together with wire like some funky abstract art. I was itching to explore but that had to wait; there was strict protocol to be followed; I was to meet the chief and the headman before I could settle in.

At a larger-than-most clearing in the village sat the chief’s “palace” – a long low building made of brick with a tin roof. The chief clearly has electricity and a sound system with hefty decibel levels. To one side, beyond the surrounding wall was a shabby open-sided hut made of crudely hewn tree branches and topped by thatch. It is here that the chief meets with the common folks and passes judgement. Here too there was strict adherence to norms. We crouched at the entrance and clapping softly with our hands entered the hut. Since it was empty, I wasn’t sure whom we were saluting with the crouch and clapping. “It is the way” I was told when I asked. We sat on the benches lining the sides to await the chief but this august person was clearly busy with important work and eventually after waiting an hour or so, we met with the prime minister of the village and one of the headmen. We crouched as before and were asked to state our case. The prime minister although quizzical, had no issues with my proposed stay and after a few minutes of pleasantries we were free to leave. There are more than a thousand inhabitants in this village and there is a strict hierarchy.  The chief is followed in order of importance, by a sub-chief who in turn is followed by the prime minister. Next in the totem pole are some chief headmen, who in turn have a few more headmen under them. Any complaints or issues have to be brought to the chief’s attention following this order. Any jumping of queues no doubt brings disaster on hapless heads!

Duty done, we trooped back to Malambo’s grandparents’ compound. The thatch fence doesn’t quite run all the way around. There are gaps filled in with bits of metal, bits of wire and some plastic. PVC tubing has found innovative uses never dreamed of by the manufacturers. There are three huts within the compound. The huts are typically set such that the back wall juts out and forms a part of the fence and the only door is set in inner wall. Each hut is made of rough tree limbs set vertically into the ground, closely together. The spaces in between are filled with clods of earth and plastered over with layers of mud to form a smooth surface. The more affluent use cement, and those with yet more money apparently have a fondness for lurid green or blue paint. There are those with a more artistic bent. Rows of empty bottles form edges for flowerbeds that are yet to be planted. The roof is made of more tree limbs leaning inward to form a pointed peak. This is covered with thatch or for the more well-to-do, tin roofs. None of the huts have windows and all have just one door. The door is usually made of rough planks with wide uneven gaps in between. I was given one such hut – apparently unused and used as a store room. Malambo’s grandmother clearly takes her hostess duties seriously and the hut was emptied, swept and spread with empty sacks of grain. All I had to do was spread my thermarest and sleeping nag. I shared my hut with some rats, a prolific family of cockroaches and an army of ants. I had asked to pitch my tent in the yard but was vociferously overruled. Not for the fear of wild animals apparently but for the fear of ridicule. Apparently a guest sleeping in the yard would reflect badly on the host and almost impossible to live down. 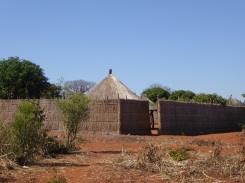 A small open-roofed three-sided cubicle at one side forms the urinal and also doubles as the bath house. There is no hole in the ground though and the sandy soil is liberally soaked with urine and soapsuds in equal parts. Thankfully most of it seeps into the sand instead of collecting in puddles. I opted on the side of prudence and made copious use of wet napkins instead of bathing for the days I spent in the village. A separate similar enclosure was the toilet. “This is for number one and that for number two” I was told. And never the twain should meet.

The days were spent walking around the village in the company of Sicily, Malambo’s sister. Named after a tiny island next to Italy, she explained carefully to me. In this village where her grandmother has grown up, it seemed just about everyone was related to the family. I lost count of sisters, cousins, aunts, great aunts, uncles, nieces and nephews that I was introduced to. I saw the school, the local market, the local hairdresser and the most affluent business, the bottle shop. The village did not always have clean water but does now. 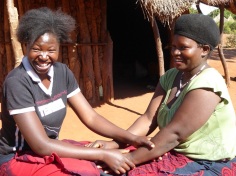 Plumbing is yet to come to Mukuni. Even the chief’s  importance does not extend to it yet. Water from a bore hole is pumped into six huge tanks that are turned on a few hours of the day. This is where the women come to collect water each day and walk back to their huts with buckets balanced on their heads. Children frolic in the stream of water and pose cheekily for photographs. This is a village with many artists, especially for wood carving. Talented young men, they proudly exhibited their work and chatted genially with me as they explained the process of carving, smoothing, varnishing and finishing the products.

With no electricity, the day begins and ends with the sun. All cooking is done outside in the yard over a wood fire. The men are supposed to go into the forest to cut down trees and bring in wood but on more than one occasion, I saw women performing that job in addition to cooking, cleaning and taking take of the household. 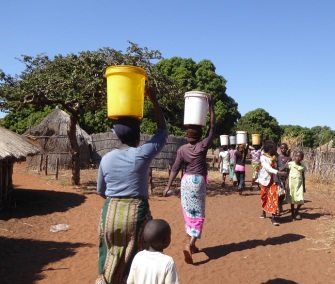 For lunch and dinner the main food is nshima, a doughy lump of maizemeal. Family members drop by to chatter, exchange news and occasionally eat with us. The men seem to eat on their own in their huts and our little circle in the yard is women and children. Nshima is the staple in most of these countries albeit called pap in South Africa and sadsa in Zimbabwe. A handful of nshima  is pinched off the communal pot, rolled in one hand into a ball and then dipped into a thin soup of tiny dried fish and some wild greens. It brought back memories of staying in villages in Laos where the mode is much the same. Except instead of nshima, they use sticky rice. They too use fish that they fish from the nearby river. The more affluent here buy meat from the local butcher. But the meat doesn’t come from the village; it is bought in from town and cuts hang from a tree baking in the hot sun. The butchering is done at the same spot while customers wait. 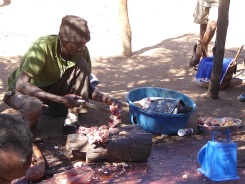 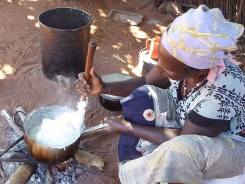 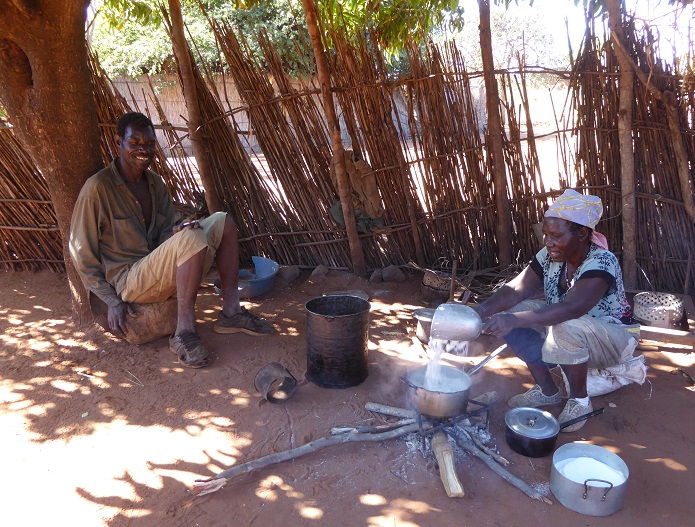 They are apparently long-lived in this village. The older generation are in their late seventies and even eighties and from what I could tell, other than the usual ailments of old age, in good health. They have a quiet dignity that the younger generation seems to lack. While Malambo’s grandparents exuded a graciousness that was genuine, his sister seemed to have an endless list of things she claimed she needed and didn’t have. I had brought with me some food as a token of thanks – maizemeal, sugar and salt. This, I gave to Ernice, the grandmother who graciously accepted them. I had also brought some gifts for the children but these seemed to fall far short in the estimate of the younger generation. Sicily explained candidly that I was a muzungu, and as such I was apparently supposed to provide them with all they lacked. “You have and we don’t so you must give us” she said quite honestly puzzled that it had to be explained to me. My comment on not being a muzungu fell on deaf ears.

It is strange, this sense of entitlement. I remember this from my days in East Africa many years ago. It can be annoying, but more than anything else, it makes me curious. Where does it stem from? There are many parts of the world that that I visited, far poorer than this village. Yet in those places there was if anything, a diffidence to accepting gifts. Cultures where people are keen to share what they have, however little. In places where I have to make inventive excuses so as not to take what little they have. Why is it different here? Is it cultural? Is it something that is deeply ingrained? Are the generations of aid to Africa to blame? I have no answers but perhaps others more knowledgeable than I, do. 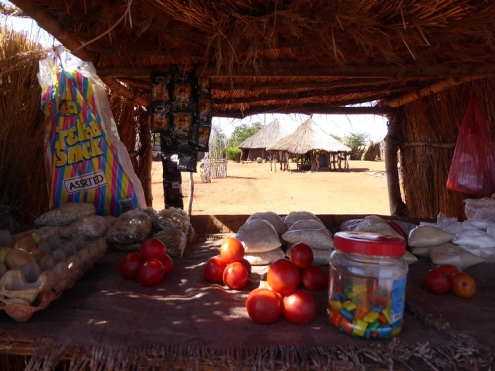 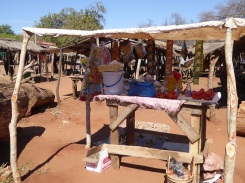 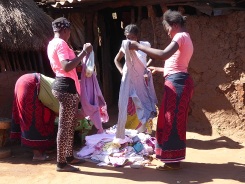