Supposedly taking place in 1300 BC, the tale of Jason and the Golden Fleece has been told and re-told over some three thousand years. Appearing in a written form during Homer’s time around 800 BC, it is a legend peppered with revenge and jealousy, treachery and heroic feats, sorcery and magic in the best of ancient Greek sagas.

As with all such sagas, there are tales within tales, filled with vendettas and vengeance of gods and mortals. But in brief, the tale begins with Phrixus and Helle, children of King Athamas, who flee Greece to escape being sacrificed. Their flight across the Black Sea is made on the back of a winged ram, courtesy of Zeus. But of course, no ordinary ram would do for such a tale; this ram has a fleece of gold. Enroute, Helle falls and dies but the boy Phrixus is carried safely to the Kingdom of Colchis, on the eastern shore of the Black Sea. He is welcomed by King Aeetes and the fleece of the sacrificed ram is placed under guard of a fire-breathing dragon and deemed impossible to steal.

The palace intrigues continue over a couple of generations until Jason of Thessaly, the son of the rightful king, aspires to the throne. His uncle Pelias the usurper, promises Jason the kingdom in return for the fleece, thinking the feat impossible and the death of Jason a virtual reality. And so our hero sets out on a special boat the Argo, and sails across the Black Sea, up the present-day river Rioni, to Colchis, near present-day Kutaisi. Yet more intrigue and treachery bloom, leavened with passion and magic. Heroic feats abound amid impossible conditions and Jason finaly returns to Greece with the fleece as well as Medea, the daughter of King Aeetes.

Such is the tale of yore but there might be a more plausible explanation for the origins of the famed “Golden Fleece” of Georgia. The Caucasus mountains have an abundance of gold and mineral deposits. Particles of gold are carried downstream by its fast-flowing rivers and have been harvested by the locals for millennia using an ingenious method. It was common practice place shaggy sheepskins in the river to trap the flakes in the fur. The skins were then dried and shaken to dislodge the trapped flakes. And lo and behold – a fleece that showers gold! 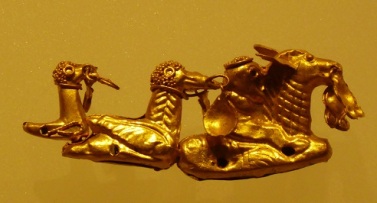 Whatever the truth, there was gold aplenty in the ancient kingdoms of Georgia. Archeological evidence shows gold mining in this region, began in the fourth millennium BC as evidenced by items found at burial mounds at various places. The Treasury exhibit at the Museum of Georgia has a dazzling array of beads and buttons, necklaces and earrings, diadems, and belts, some of them dating from seventeenth century BC. 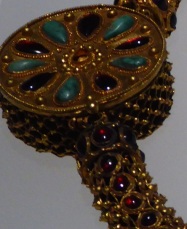 There are edicts inscribed on gold leaf, animal motifs and abstract patterns. As the civilizations evolved, so did their craftsmanship. The use of precious gems became more common and the designs more intricate. I gazed in awe at the plates and cups, bowls and vases of exquisite craftsmanship and mind-boggling antiquity.