Traveling through Armenia, I’d been hearing stories of Ani, the fabled capital of the Bagratid kingdom of Armenia dating back to the middle ages. There are rumors of a place near Gyumri from where one gets a view of Ani. But nobody I met had actually been there, nor could anyone give me information on reaching it. On a whim I decided to travel to Turkey and see if I could get to Ani.
Despite tantalizing snippets of information found online, I failed to find direct buses from Tbilisi to Kars. The much talked-about train connection between Tbilisi and Istanbul is operational but as of now, only for freight. I found myself going the long way from Tbilisi to Batumi and then into Turkey. Across the border, from the town of Hopa in Turkey, is the once-a-day bus to Kars.
A big comfortable bus, excellent roads, large picture windows and gorgeous scenery – what’s not to like? Better yet, my tentative request to change seats so I could take better pictures, was at first met with bafflement. Once understanding dawned, I met with the usual welcome that greets a visitor in these parts. To a host of “Hosgeldiniz” and “Bir Sey Degil” I was seated up front with my co-passengers helpfully pointing out sights they thought I should not miss. 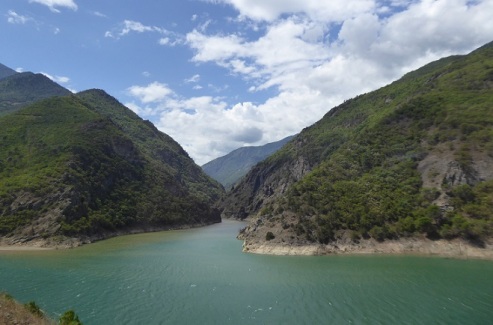 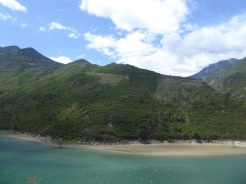 And sights there are aplenty and constantly changing. It began as a narrow gorge lined with lush forested banks with a string of lumber mills. But soon are hugging the cliff edge, going through several tunnels, with the vast Chorokhi reservoir below. The water glints in the growing sunshine, now indigo, now turquoise, now green. On the river are large circular stations, I imagine fishing nets. Small and large towns lie high on the banks under clear blue skies with scudding clouds. 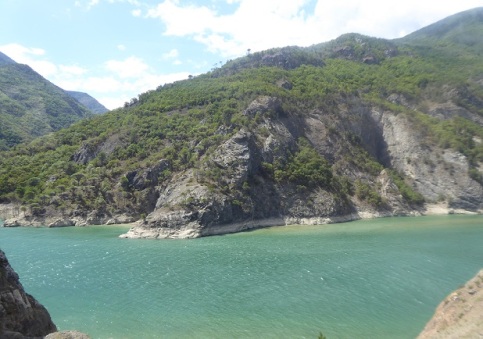 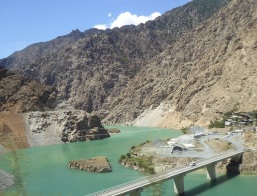 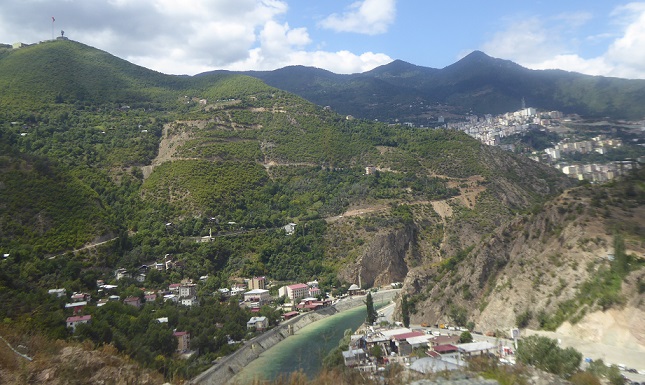 We climb steadily as we head into the highlands and enter another gorge. This time the high ridges are more arid, dotted with dry scrub. Habitations are fewer but here and there, on the banks of small tributaries are villages. The scenery is similar to that of the high plateaus of Ladakh and Tajikistan, Iran and Afghanistan. The same trees stand tall around small plots of farmland. The same rock walls form boundaries of gardens. 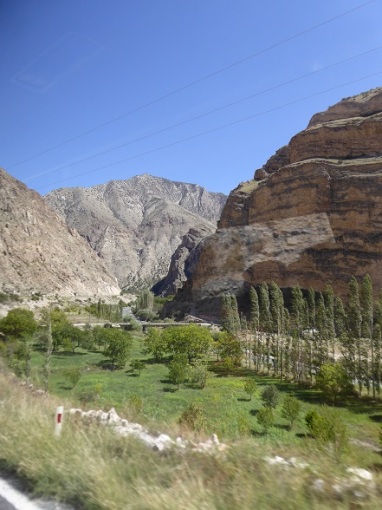 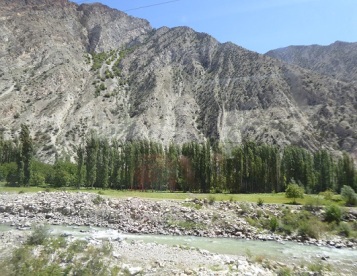 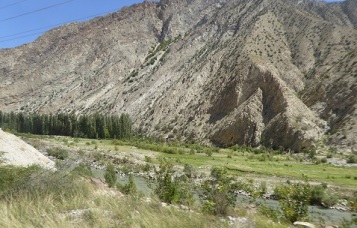 Abruptly it seems, the valley widens, and there are fields on either side as far as the eye can see. The clusters of small towns in the distance look like toy models amid the vastness. It is a vast grassland now, like the ones in Mongolia or Kyrgyzstan. 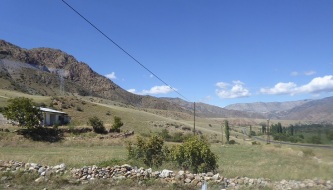 This is cattle country. There are huge herds of cattle, sheep and goats. They look like tiny speck in the distance but closer, I can see the herdsmen rounding them up. Stops are obligatory as herds of sheep cross the road, hurried along by sheepdogs. 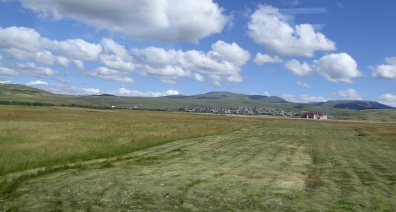 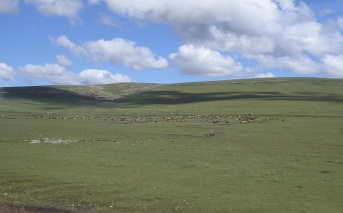 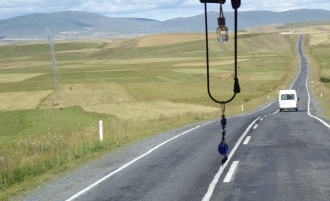 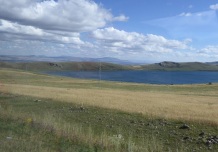 Most of the areas are meadows that are harvested for fodder. Winters are long in these parts and harsh, with the temperatures plummeting to well below the freezing mark. Now, at the tail end of summer, the fields are a hive of activity. There are mounds of hay on almost every field waiting to be piled into gigantic stacks. Some of the stacks dwarf the adjacent houses. 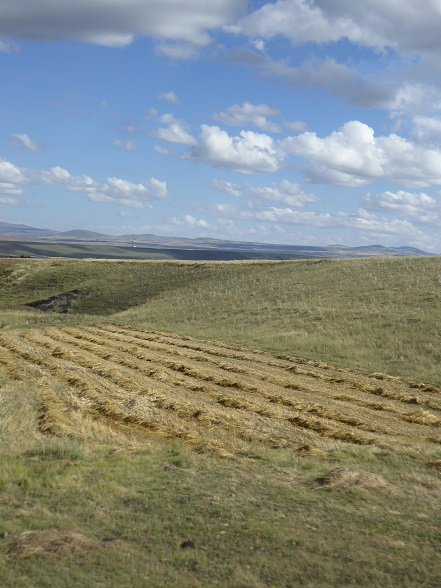 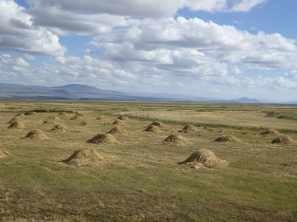 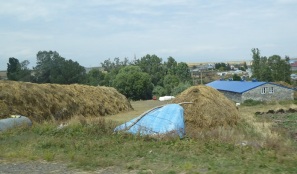 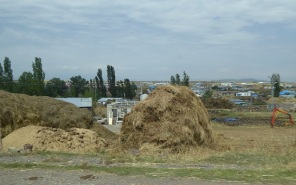 The houses themselves used to be stone with turf roofs. Some appear to be still in use, although now they sport satellite dishes and solar panels. But most of the houses are new, made of cement and mortar, with power lines trailing from the roofs. There are more tractors than cars here and a ride from one village to another is a novel one, in a cart hitched to a trailer. 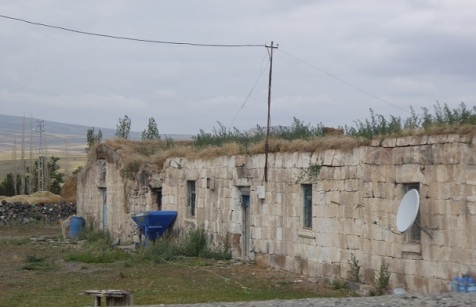 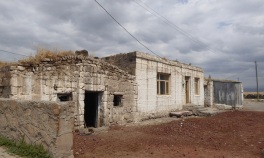 The small towns are a strange mix of sleek new SUVs and horse-drawn carts; of showrooms filled with the latest gadgets and a sheep waiting to be turned into kebabs. Of the inevitable tea rooms with their tables of men chatting over tulip-shaped glasses of tea. The eight hours on the bus seem to have vanished in a blink and I arrive in the rough-at-the-edges town of Kars sooner than I thought. 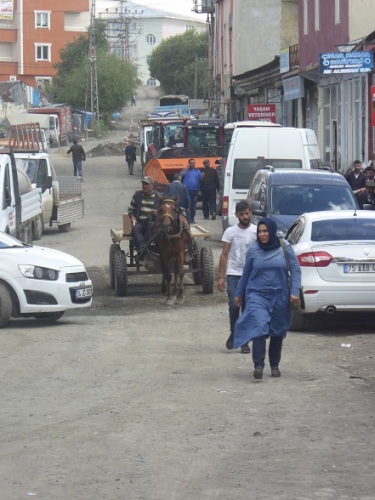 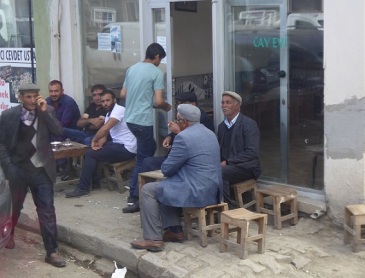 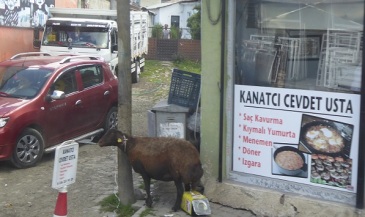