On a wind-swept plateau bounded by the deep gorge of the Akhurian river on one side, is the site of Ani. Begun in 961 AD, it flourished between the 10th and 11th century as the capital of the Bagratid kingdom of Armenia. 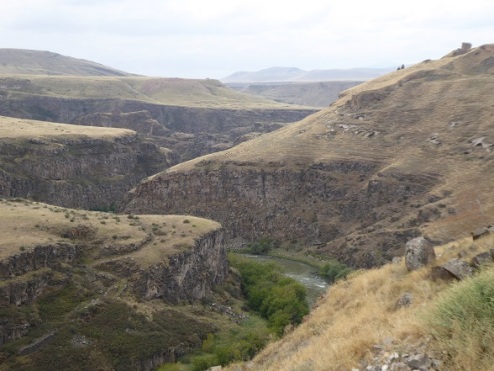 Its position on lucrative trade routes ensured that Ani prospered and became famous as a wealthy center of arts and culture. Known as the city of a thousand and one churches, with a population of a hundred thousand at its peak, its splendor was well known. Inevitably, this rich gem was coveted by many and fought over bitterly. Within a span of three centuries, it fell under the reign of five different rulers – the Bagratids and closely related Bagrationi rulers of Georgia, followed by the Byzantines and later the Seljuks, Safavids and Ottomans. The history of Ani is hardly that of a long and peaceful reign, typical though it is for any important historical site. 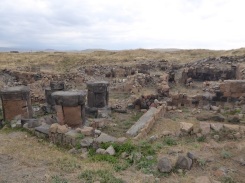 Although best known for its churches, Ani was a medieval city that incorporated the styles and arts of the Caucasus, Iran, Turkestan and Khorasan. Translated into stone, were all the distinctly different architectural traditions, testifying to a rich multi-cultural center that evolved with each generation of its rulers. Little remains today. Sacked by the Mongols in the 13th century and devastated by an earthquake in the 14th century, its importance lessened, and by the 17th century it was abandoned and largely forgotten. A ghost town already, the neglect of the past century has ensured it is even more so now. Today it stands in eerie isolation, the jagged edges of its ruins forming a ghostly silhouette. 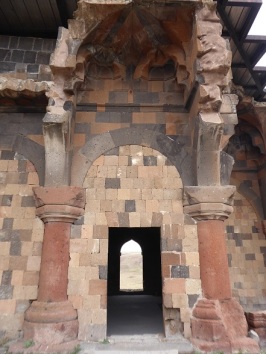 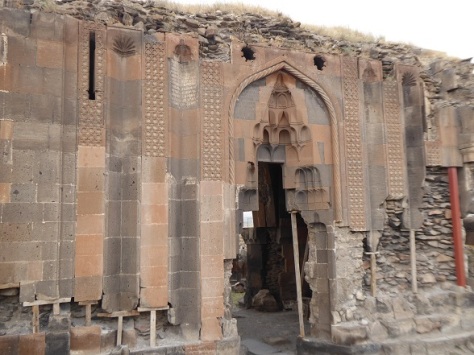 Bits and pieces of the wall that once encircled the city-state stand, some of it badly restored. The lion emblem of the Bagratids still adorns one of the gates, although eroded over the centuries. Gaping holes mark what still stands and tumbled stones and blocks litter the area, the remnants of buildings from more than a thousand years ago. 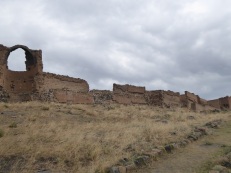 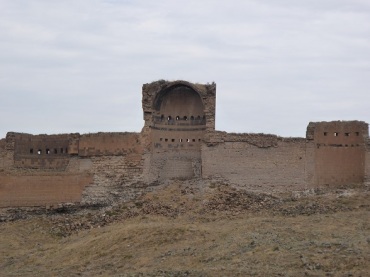 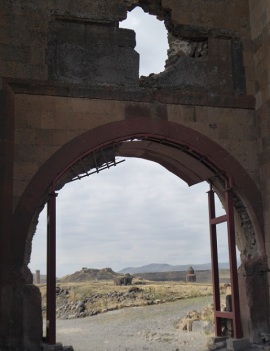 Most churches, mosques and other buildings are empty shells with missing domes, portals and walls. The Cathedral of Ani, the Church of the Redeemer, the Church of Saint Gregory and the Church of Tigran Honents all mere hints of past glories. 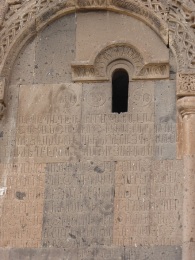 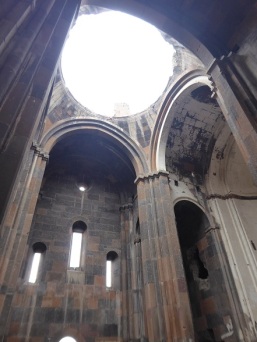 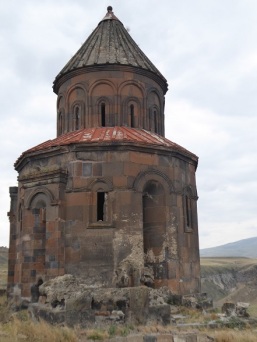 Collapsed roofs lie amid overgrown grass. Only in one, the church of Tigran Honents, do I see a whisper of the once lavishly painted murals. Curiously, the style is identical to the murals I saw in the church of Vardzia and likely Georgian in origin. Although discernable, the murals are mostly obliterated by graffiti. But in truth, the rampant graffiti is no more or less than what I saw in the ruins of Erebuni, in Armenia. 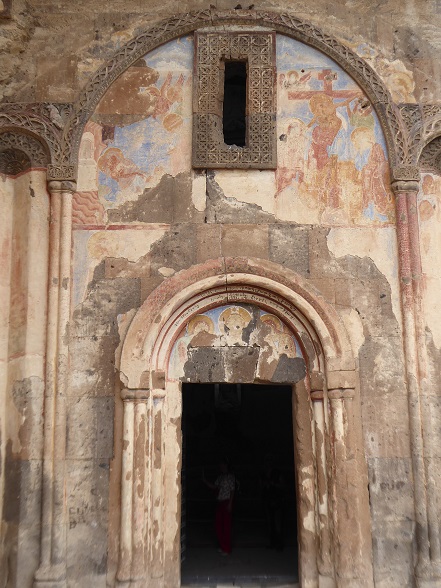 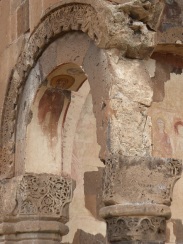 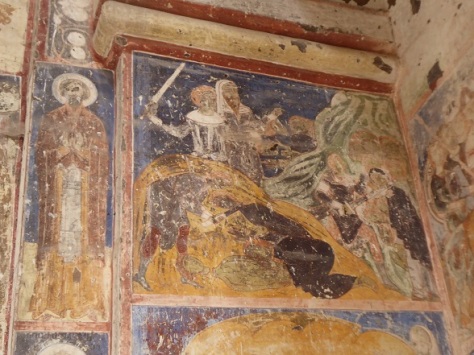 Some of the damage is clearly attributed to earthquakes – the cracks caused by quakes now stapled together in an effort to prevent total collapse. But there are signs of other damage as well. Bullet holes, gouged walls and shattered pillars are irrefutably man-made and extensive. What nature did not complete, the hands of man did. There is yet another source of destruction. Blasts from the stone quarry across the gorge in Armenia are supposedly contribute further deterioration. 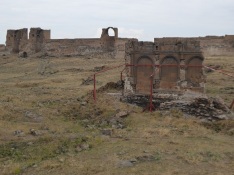 There appears to be an effort though to restore it now, stemming from a few years ago. Almost all buildings are supported by scaffoldings, and teams of workers dot the area. But this is not a project that can be completed overnight. The vastness of the area, the neglect of a century and the state of disrepair dictate that this is a project that will require decades if not more. Perhaps in time Ani will shine again. 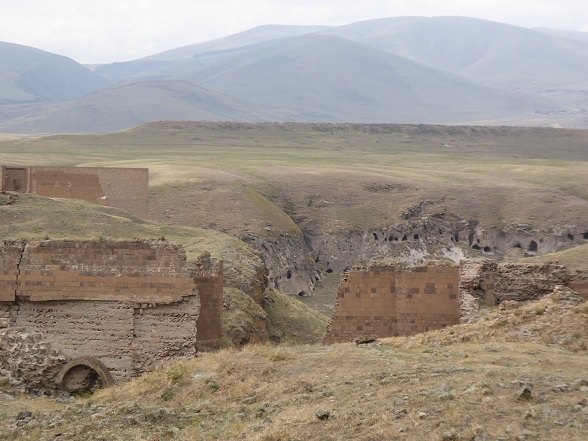 All tourists that visit Kars are here for the sole purpose of seeing the ruins of Ani, but rarely does the surrounding area come under the tourist radar. This part of the world that is shared by present-day Turkey, Armenia, Georgia, Iran and Azerbaijan has seen the march of humans from a long time before. Dating back to the Calcolithic times there are petroglyphs that dot the area and the ridgeline bordering the Bostaniar creek is riddled with caves. Thought to pre-date Ani and inhabited until early 20th century, these beckon to me. My queries resulted in being told that they are not easy to reach them and many of them are apparently off-limits. The reasons were unclear at best. I have run out of time this trip but I promise myself that I will be back to see some of these intriguing sights.