Samangan, Afghanistan
July 8, 2019
Some hundred kilometers southeast of Mazar-i-Sharif is the provincial town of Samangan. A nondescript town now, but it was once a flourishing Buddhist center with a monastery and an unusual stupa built in the Kushan period of 4th to 5th centuries. Predictably, it was on my wish list to visit and I headed there with the requisite guide in tow.

The drive from Mazar passes large orchards of almond trees. In between are vegetables and areas where fodder for livestock is grown and harvested. People are busy at work with tractors riding some of the fields. We come to the town of Samangan soon with its small shops and bazar. It is hotter than the usual blazing temperature and some children are happily splashing in the canal that brings irrigation water from the mountains. They are having a ball!

Just outside of town is a ridge with caves dug out of it. Like the many cave complexes in other parts of the country, it is shorn of any decorations that once existed. The largest cave is spacious, with a domed ceiling with traces of lotus petals. In another are four niches at the cardinal points, some having carved arched niches of their own. At the top of each large niche is a pillar-like carved segment. I wonder at the pillar and have a few ideas of my own. All surfaces are liberally pockmarked with bullet holes.

The third is more complex. A set of two tunnels run through the ridge, connected via wide platforms with arched openings. My guide is convinced that this is a bazar of old. It is curious, but perhaps understandable that the only structures they can relate to are the ones they see in their own culture and lives. 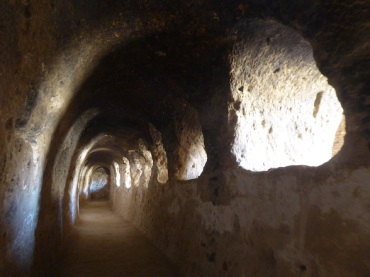 Dug out of the small hill in front of the caves, is the stone stupa. The narrow passage carved out of the rock that surrounds it is the usual path for a kora. Climbing up the hill I get a better view of the stupa itself. It is cut out of the rock much like the churches of Lalibela in Ethiopia. It is quite different from the usual Buddhist architecture elsewhere in Afghanistan or Dunhuang in China or indeed the Ellora caves of India. The harmika atop the stupa once housed Buddha’s ashes but now only two of the square concentric bases remain. 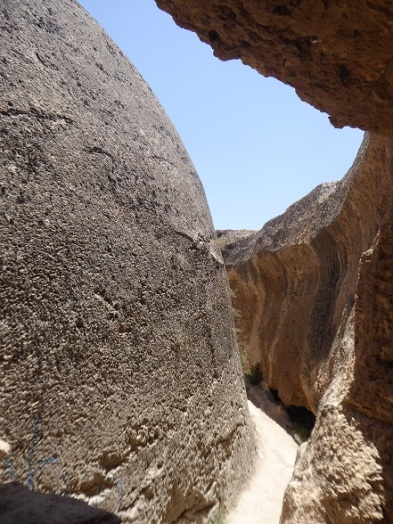 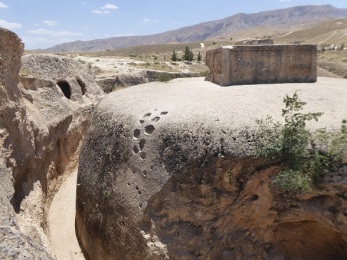 It is this that has been firmly lodged in local parlance as the Takht-i-Rustam, or the Throne of Rustam. A proffered explanation of the features of a stupa falls on deaf ears. They neither know nor do they care. Takht-i-Rustam it is, and Takht-i-Rustam it will remain. But at least I was spared colorfully embellished tales of the Rustam and his throne, no doubt told with relish to other tourists.