The San are the indigenous peoples of southern Africa. They were hunter-gatherers who had territories that span present-day Botswana, Namibia, Angola, Zambia, Zimbabwe, Lesotho and South Africa. In most places they lived, they left behind legacies in the shape of paintings and carvings on rock faces and caves. Some are an astonishing twenty-five thousand years old while some are a mere few thousand. Most cave paintings or rock art as it is called, depict the everyday lives of the peoples. They show wild animals and hunting scenes; they show domestic scenes where human figures are engaged in everyday chores, sometimes they show animals that have been domesticated. But there is something even more intriguing about the San rock paintings. It is argued that many depict scenes of shamanic transformations. Experts claim that some of the paintings of hybrid half-humans are medicine men and healers and that some of the paintings depict the shamans entering trances.

In the Masvingo district of Zimbabwe are a couple of places where such rock art can be found and I wanted to see it. The road lay to the east of Kyle Game Park and below us the loops of the Mutirikwi river glistened in the sun. On the way, we spotted a snake as we drove past and we paused to take a look. The long thin body looked so like a branch that had it been on a limb it would have been all but invisible. But it was lying across the road sunning itself, the head raised off the ground. As Jared persuaded it to move into the bushes, it flicked out its tongue – a livid orange with black tips. Such are the passing sights when travelling through Africa apparently. Mental note to self: be extra careful when tramping through the bush and reaching for a branch.

The dirt road lay through land covered by scrubs and bushes with the occasional taller tree. Sometimes there are a few groups of huts huddled together in a small village. We stopped at one to ask for directions. Broad smiles preceded greetings, some in English but mostly in Shona between Amy and the villagers. One of the women, Miro was delighted to be photographed and invited us into her kitchen. The kitchen in all village dwellings are round. I remember these from Kenya and remember the reason that I was told. Ghosts like to live in the corners they had told me. So no corners equals no resident ghosts. It is the same here, so said Miro. 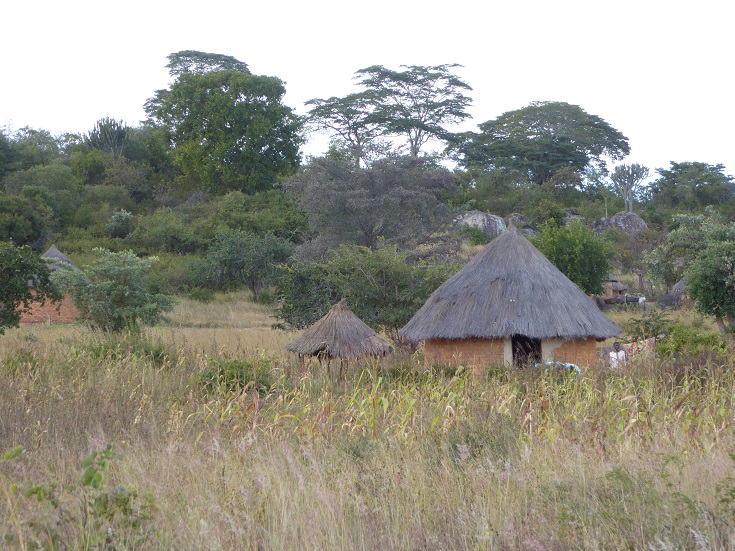 The central fire pit had a few pots still on the logs and above it, hanging from a line were bunches of corn cobs. They have a maize field and out by the door were kernels laid out on a mat, drying in the sun. But it was the shelves in the kitchen that took me by surprise. Made of mud and varnished a dark black, they were made as built in shelves to house the plates, bowls and cups. I could not help thinking of the kitchens in traditional Ladakhi houses in northern India or those in traditional Tibetan houses. The same central stove, the same shelving displaying the flatware and crockery. The larger the display of crockery, the higher the status of the woman. As usually happens, we attracted the attention of the rest of the villagers and spent some time chatting. It was one of the men who offered to show us the way to the Chamavara caves with the paintings. Hopping into the car, he directed us to the site. 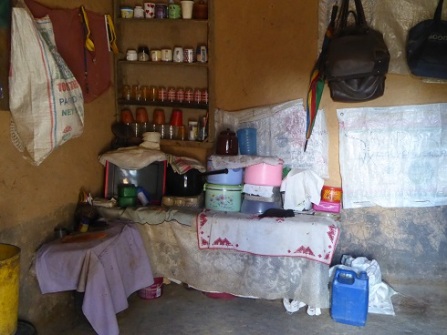 We turned off from the wide dirt road to a smaller track which in turn dwindled into a footpath at some point. Wide open meadows seem ringed by rounded boulders of granite. Some of the boulders were so delicately balanced that it seemed a puff of wind might send them rolling down. Here and there were the rounded thatched huts. Some goats grazed nearby and the shepherd called out the usual “Hello, how are you?” We followed our guide takes us up the narrow path. The overgrown path testifies to the fact that this is a rarely visited site.

Through a narrow passage through two boulders we came upon a large shallow cave and high on the inner wall in reddish-brown paint are a few dozen figures. These are not maintained or taken care of, says our guide and not in good condition. But to me, they look marvelous. The fact that they are not widely known, nor visited is a part of the charm.

The animals are depicted in beautiful detail. Some of the animals are clearly kudu and some are giraffe, while some look like cattle. The human figures are fainter and more stick figure-like. Some appear to be dancing, some sitting with knees drawn to the chest. Some are bent forward. My mind was dancing with questions. Do these have special meaning? Are there more figures that my untutored eyes cannot see? What stories do they tell?

2 thoughts on “The Tales that Rock Arts Tell”