What was meant to be a two-day stay has turned into a week-long stay. I had arrived at Muunze Forest Lodge entirely by chance and had met Amy, Jared and their lively eight-month old baby Lea. The days have vanished in chilling and sharing stories and laughter, a craft-making project and gorging on the results of Amy’s considerable culinary abilities. Somewhere along the way I seem to have morphed from a random tourist to a favored guest.

A couple of days ago, when we went into town to run some errands, I met Amy’s family in Masvingo. Craig and Debbie Smith live there with their sons Joshua, who is just about to finish school, the next younger, Sam and ten-year old Matthew, the youngest. They were warm and welcoming and eccentric enough to be interesting. I had a nagging feeling that they reminded me of someone or something that I knew. And then it came to me. This was Gerald Durrell’s family! Being around them was like being in the midst of all the drama and everyday happenings of My Family and Other Animals. Listening to stories and tales of their days on their farm until the farm invasions forced them out, has me firmly convinced that this is another family cast in the same mold.

The family came up from Masvingo today and we were all going for a boatride on the Mutirikwi river. Craig and Debbie, Amy, Jared and Lea, Joshua, Sam, Matthew and I made our way down the scrubby slope to the boat. This “boat” has been refurbished by the family and bears no resemblance to any boat that anyone has ever seen. It is a flat platform lashed to six empty metal drums. A metal frame fixed onto the platform has railings along the sides and supports a sloping tin roof. A couple of benches line the sides and a few sections of metal pipes attached to spots on the railing form ingenious holders of fishing rods. A ladder-like wooden section forms the gangplank. At one end, the motor that had been hauled in the car was attached and we were ready to sail. It was a pier or a landing stage pretending to be a boat. But for a large group of people, it is actually far more comfortable than a conventional boat. Debbie said they even slept on the boat overnight once. 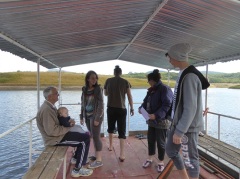 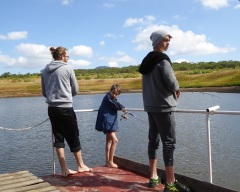 The plan, Craig announced was to go upstream. That way, he explained, if the motor died, we could drift downstream and somehow paddle to the shore. I wondered how many times this drama had already been played out. I was entertained with stories of how just recently, a tour group from one of the other lodges had been doing a fair clip on their powerful motorboat when their boat hit a rock and sank.

“What happened to the people?” I asked.

“Oh they swam to the shore, with all limbs still attached. But their cameras, bags, money and passports are at the bottom of the river.”

“That is why” explained Craig, “Puttering along at three km/hour is so much better. We won’t sink at that rate, just limp along.”

What a relief, I thought since swimming does not fall within my repertoire of skills.

The day was sunny but the stiff breeze made it chilly. Mud banks rose on either side, with animal tracks leading down to the water at many spots. Further up the bank were bushes and shrubs. Usually the water level is high, so all this area is under water but the lack of rains last season as well as water drained off for irrigation means a lot more land area is visible now.

Amy, who has the eyes of an eagle pointed to what looked like some smooth greyish boulders up ahead, mostly hidden by the rise of the bank. A hippo, she thought it might be. As we drew closer, we found not just one hippo but a group of them sunning themselves on the mud bank. It even included a baby hippo. Somnolent at first, the group slowly got to their feet and turned to eye this strange craft that was puttering toward them. Squinty malevolent eyes followed our progress and a couple of them slid slowly into the water. As luck would have it, the motor decided to overheat and come to a halt right at that moment. Instead of hugging the opposite bank, thanks to the current and wind, we were being gently pushed toward the hippos. They clearly did not like the look of things and a few more of the mammoth bodies slid into the water and seemed to be swimming toward us. The talk onboard turned to the unpredictability of these animals. Joshua, who has watched far too many you tube videos of death-by-hippos was using the paddle frantically to change course and urged Jared to help. I was not quite sure what came next while the rest onboard were engaged in arguing the land speed of enraged hippos. 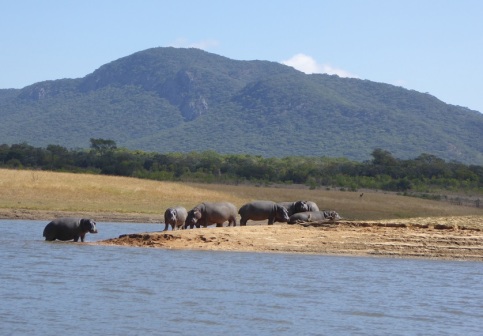 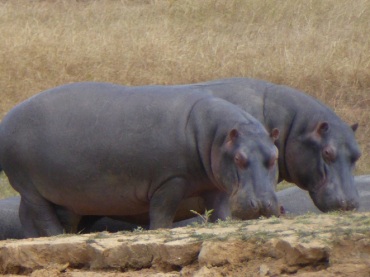 The motor thankfully chose that moment to come back to life and we turned around and headed downstream. The four sets of beady eyes just above the water level remained in place and soon we rounded a curve and were out of sight. We headed downriver to see if we could catch sight of any crocodiles. Oddly enough we did. A longish shape, slightly paler than the mud bank was visible on one bank. As we neared, we saw the crocodile. It took note of us and as we neared and slowly slid into the water. 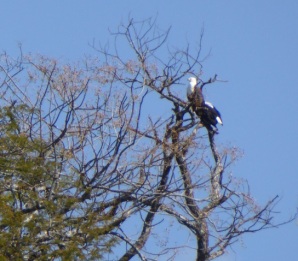 We continued on for a little more watching a pair of geese take flight. Some fish eagles were perched on the topmost branches of some trees and a monitor lizard slithered over the bank as we chugged past. A small band of cows that were grazing on the near bank turned their bovine stares on us as we headed back to the bank. The crocodile was still nearby; we saw its snout above the water. It had kept pace with the boat no doubt hoping for a tasty lunch. But nobody fell in and all limbs were accounted for as we came ashore. The only casualties of the day were Matthew’s shoes when he got stuck in the mud, calf-deep.