The first couple of days in Sukau, were spent diligently looking for a boat, and in the process I met a number of people in this village. Yesterday, I heard from a young man who has a friend, whose cousin has a brother who works with the conservation department. There may be a couple more links in that chain and it was through this convoluted grapevine, that I learned of a large herd of elephants downriver. These are the pygmy elephants that had me coming to Sukau! I could hardly believe it and lost no time in locating a boat and setting off. The boat was shared with three other tourists who had just arrived. Not tied to any tours, they were equally excited at the prospect.

Barely fifteen minutes downriver, we saw the tell-tale sight of a couple of boats huddled near a tree. Like safari jeeps, the huddles are giveaways to location of wildlife. Sure enough they were gawking at the upper branches of a tree, at a lone orangutan. A female sat, one long arm gripping a branch while her feet curled around the branch she was sitting on. She had a baby on her lap but I could only see the rounded back of the baby huddling against its mother. One little paw peeked out. The orangutan looked down, saw the cluster of three boats and unperturbed, continued eating berries, staring off into the distance.

Just then, over the water came another sound. A short, sharp trumpet pierced the air – there was an elephant lurking in the bushes on the opposite bank. It sounded annoyed and annoyed it was. By the time we had crossed the river to the other side, a young bull with two short tusks was walking out of a thicket. The wet hide showed it must have been bathing in the river when the boatloads of these two-legged creatures showed up.  He paused, looked at us as we stared at him. Clearly we were not going anywhere and after another short blast of trumpeting, he ambled off into the bushes, out of sight.

We continued downriver for a fair bit, to a place on the river with a little knot of boats. Just beyond them, on the bank, was the broad gray back of another elephant. Unlike the skittish youngster, this one continued to eat as cameras clicked away. These elephants are fully formed and proportionately built but truly are pygmies! At the shoulder, an adult is just about two meters, about the height of a tall adult human. I watched in awe. The discharge from his temporal glands traced a path down the sides of his head, indicating that this was a bull with high levels of testosterone. They are supposed to be extremely aggressive in musth, but this elephant seemed very zen. 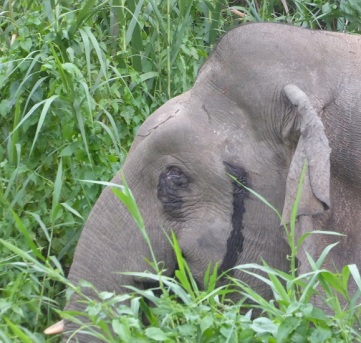 This was not the only one though. Judging from the sounds, there were others hidden from view, all intent on the busy task of eating. Nearby, the bushes along the bank swayed and shook and the sound of the stalks being pulled up and crunched down carried clearly in the air. Our boatman tried to maneuver so we could get a better look at this other elephant. In the process of eating, this one had thinned out the bushes at the edge of the bank and we caught glimpses of gray now and then. As the elephant continued eating, more of the green curtain disappeared and in an astonishingly short time, it was gone. Like a veteran at curtain call, she/he appeared before us, deigning not to notice the gawking faces or the cameras. If the first elephant we saw was a nervous newbie, this one is a celebrated diva who took the photo session as her due. 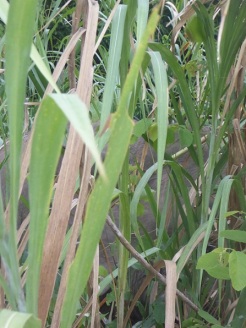 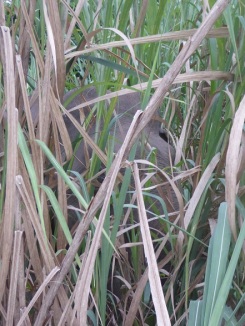 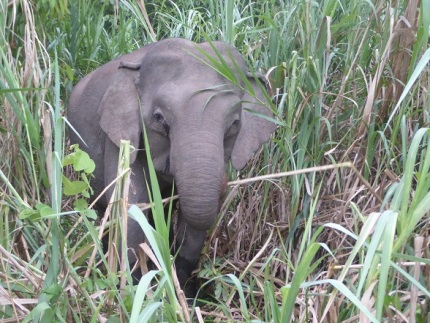