To Khaldi the Lord,
Argishti, son of Menua,
built this house and a great fortress and called it Erebuni.

So reads the cuneiform inscription on a stone found here, amid the ruins of an ancient citadel. Atop a sun-scorched hill with commanding views of the plains in every direction are the ruins. Built of large unevenly shaped stone blocks, it was once a vast citadel enclosing a palace, garrison, a couple of temples, quarters for slaves and a granary. It was called Erebuni. Indeed, modern-day Yerevan owes its very name to this place. 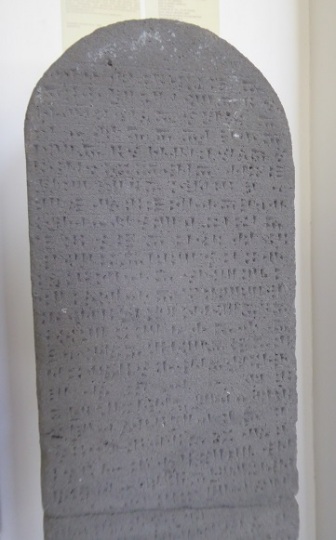 Called Arin Berd, or Fortress of Blood, it was founded by Argishti I in 782 BC at the zenith of the Urartu Kingdom. The site continued to be a center of power and importance as attested by other cuneiform inscriptions such as:

By the Glory of Khaldi,
Sarduri, son of Argishti,
Erected this house and filled these granaries

But peace has never reigned long in these parts, nor did any kingdom last long. As the might of the Urartu kingdom declined, it was conquered by the Achaemenid Empire. The strategic importance of Erebuni saw it being expanded, as it served as the capital of the Persian satrapy. In the inevitable ebb and flow of empires, it declined again when the Persians suffered defeat at the hands of Alexander the Great in the 4th century BC. 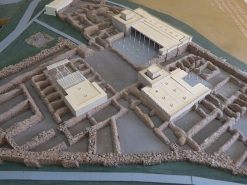 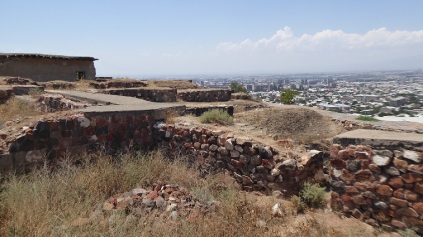 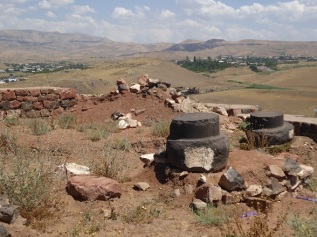 Off the tourist radar for most, and overlooked by locals as well, it has been largely left to the mercy of the elements with very little done to restore it. The stone blocks that once encircled the citadel are rebuilt for a brief stretch but lie in heaps for the most part. Bases of huge basalt pillars lie amid overgrown grass, home to scampering insects. What was once beautiful and extensive murals in the temple are now a canvas for modern-day graffiti. With a little imagination though, it is easy to visualize what must have been in its heyday. 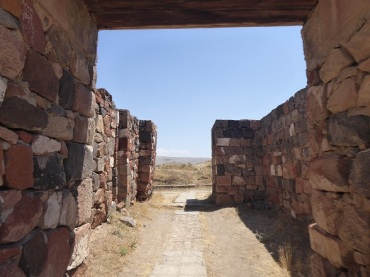 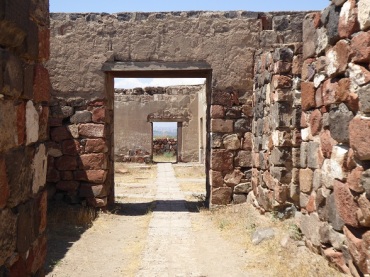 The museum at the foot of the hill has the artifacts and relics found at the site. Among pottery and beads are shreds of woven cloth and buttons. Vessels decorated with the typical Urartu design of bull heads, mingle with statuettes and stone busts. Fragments of murals show the flowing lines of a horse and bulls. And a bronze helmet, decorated with a frieze of figures stands in solitary splendor.