I had been dropped off at some arbitrary street in Masvingo from the bus headed to Harare. As usual, I was at my organized best. Armed with no book, no map, no phone, I had to resort to asking a random people on the street to get my bearings. One woman I asked had no idea but she in turn asked her friend and this friend drove me to a quaint eatery called the Blue Bird Café. As I sat inhaling coffee and trying to recover from the night-long bus journey, Moira the owner of the café mentioned a place in town. I walked up the street to take a look.

Behind a padlocked prison-worthy gate were a few rooms amid an unsavory air verging on alarming. A sunken bed with bedspreads that have yet to say hello to soap stood in a room with grimy walls. The mosquito net over the bed had once been white but now sports varying shades of grey. The shared bath had a sink delicately balanced on a pile of bricks, a tub with rings like those marking tide levels and a torn shower curtain in a symphony of greys. The toilet seat does not bear comment and I beat a hasty retreat

Back at the café, Moira mentioned a place outside of town run by friends of hers that I might like. And so it is that I find myself at the Muunze Lodge, in a little clearing in the woods on the shores of  the Mutirikwi lake.

Some twenty kilometers out of town, up a red dirt road is a large parcel of land encircled by a fence. Under a canopy of msasa and muunze trees, amid thickets of bushes is a clearing. A sprawling villa sits on the high ground and the long winding veranda looks out on the distant mountains. It is the residence of a young couple – Amy, Jared and their toddler Lea. They manage the lodges on this property with the help of some pet ducks, a couple of guinea hens, a turkey and a resident donkey called Elvis who lives up to the stubbornness that is the hallmark of his species.

There are a trio of lodges on the property. Built in typical safari style, each lodge has a thatched roof and an inviting veranda. Further down the slope are a couple more buildings, the hostels. Each is stone walled and have deeply pitched tin roofs. Equipped with a kitchen and bath, they are the sort of secluded hideaways that are a haven. Especially right now, with no other guests around, I have the run of the place. The property slopes further down to the river with the dam. Green wooden banks rise up on either side and in between the water looks invitingly blue. But Jared cautions me against going dipping in the river. There are crocodiles and hippos in these waters, seen many a time by the locals and guests alike. There are a couple of boats though and it is possible to go fishing off the boats. 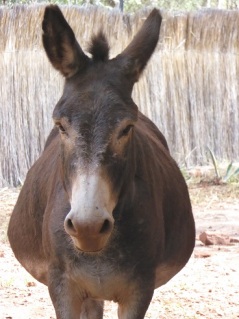 But not all the creatures are life threatening. There are monkeys that swing from branch to branch in the trees at a distance but are unused enough to humans that they beat a hasty retreat at the first sign of us. They watch from a safe distance and keep up a chattering that caries in this still air. On the other hand, the baboons are far less cautious. In the mornings they come calling. Sipping my coffee, in the morning I see a whole tribe come visiting. A big male, easily the size of a greyhound comes accompanied by five females, some with clinging babies. They sip water from the spigot in the yard, some sun themselves on the patio while the younger ones climb up the trees to jump on the tin roof and play games of catch. The snick and ping of the camera makes they curious but stepping out into the patio has them clamber over the fence and disappear into the forest at a lightening pace.

2 thoughts on “Where Baboons Come to Call”