On the road from Kabul to Bamiyan
Afghanistan
July 1, 2019
Before arriving in the country, I had read that road travel in Afghanistan is to be avoided. Many roads are within Taliban-held territory and road blocks are a common tactic to kidnapping foreigners. Nor are foreigners the only targets; well-known or affluent Afghanis are equally at risk. Information on the ground in Afghanistan unfortunately corroborates this and those who can afford it, fly. Kam Air flights are packed, and seats are difficult to come by. A cancelled flight meant I had no option but to travel by road if I was to see Bamiyan in the time I had. 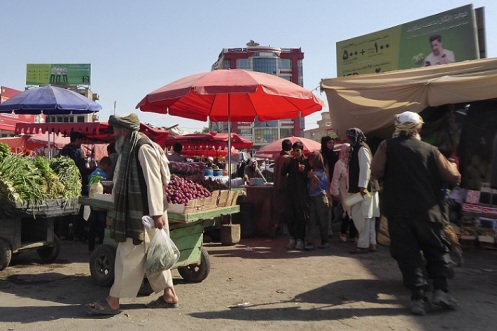 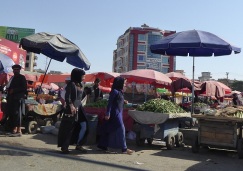 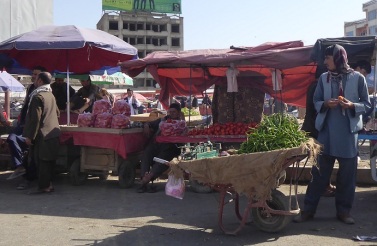 Plenty of locals travel by road, squished in like sardines, seven to a small passenger car. But this too is risky. Although ordinarily, Afghan hospitality is generous to a fault, these are not normal times. A whisper of a foreigner can be conveyed by cell phones and ransom can be set as low as a couple of hundred dollars. Tempting though it was, I figured prudence the better part of valor. A car, a recommended and vetted local guide, and we set off from Kabul. 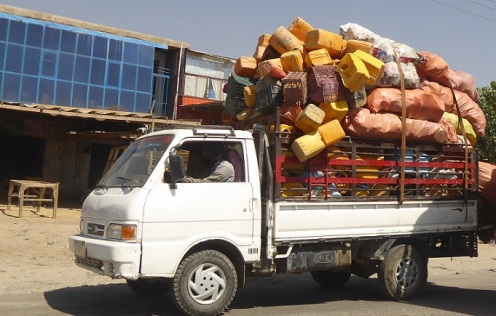 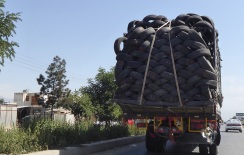 The road north is a busy one and getting to the outskirts of Kabul, we battled traffic. Piles of kindling, stacks of lumber and enormous earthenware pitchers are among the paraphernalia of goods lining the road. The big bazar has carts of produce, a maze of minivans going off in different directions. The cacophony from horns of irate drivers, goods being hawked at top volume, cars, carts, pedestrians, sheep and goats, tractors and minivans made for a traffic jam unlike any other. Soldiers with weapons and barricades at checkpoints may be a common sight, but there are no traffic police. Trucks on the long-haul route to the border carry everything from used tires to bricks to plastic containers. Sometimes even a couple of men atop the pile. 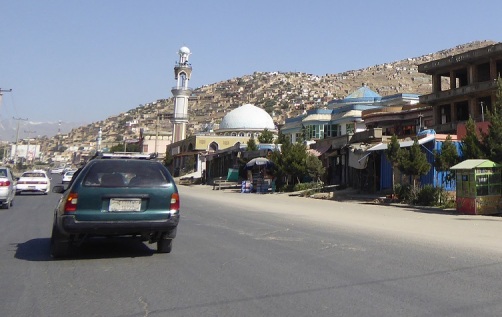 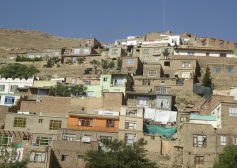 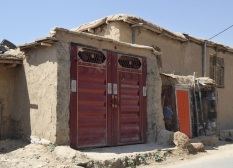 Soon we leave Kabul behind and the farms begin. This is grape country – almost all the farms are vineyards producing a large variety of grapes. But alas, not for wine. The houses are no longer cement but made of mudbricks and the dirt roads tramped on foot or a bicycle. The shops along the smaller towns sell everything from plastic pitchers to nails to soap to sacks of flour and everything in between.

A couple of hours on the road and we turn west. This is not precisely Taliban territory, but for a large stretch, the villages along this road are strong supporters of the Taliban. The danger of being stopped is very real. But we had a plan. A burqa has been brought along and I am enveloped in it. I am to sit in the backseat and like a good Afghan woman, not say a word. A difficult task for me, with my many questions, but I keep mum, at least while passing through a village or town. 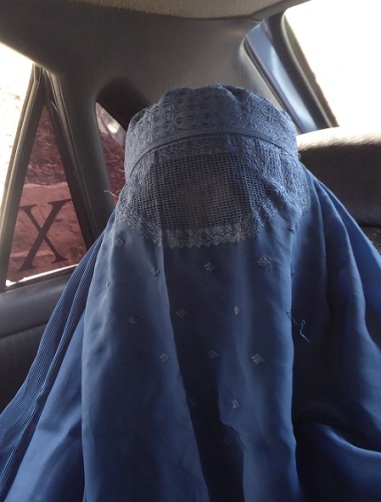 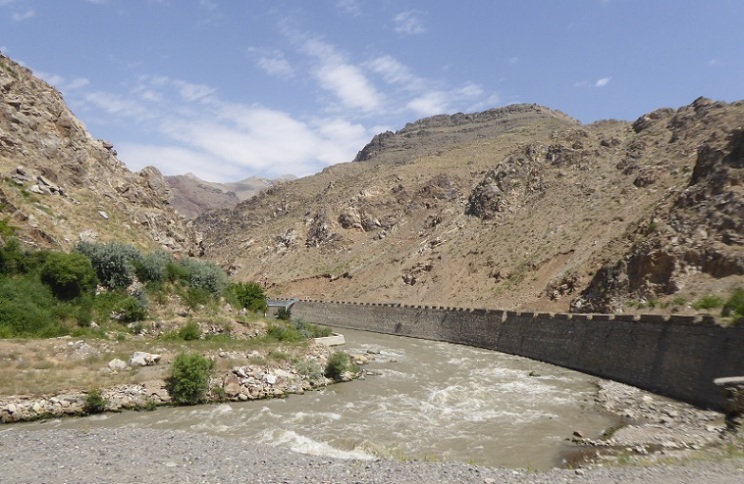 The burqa is not as bad as I had imagined. I had thought I would roast but as we climb up the valley, the temperature drops, and it is not so hot. Women who wear glasses are clearly not meant to wear burqas; the mesh only reaches half-way down my glasses. But no matter; the camera is whipped out for photos aimed out the window of the speeding car. And is quickly hidden under the folds as soon as we pass people or villages. Actually, it is quite spacious inside my little tent of blue. I could have an entire desk laid out on my lap! Stopping at checkpoints, the men peer inside and in true Afghan fashion deign not to speak with me. The men in the front seat speak for me; I am a relative going to visit family. They check the trunk of the car, but I had deliberately left my backpack behind in Kabul and stuffed my things inside a large sack – the sort you see in bazars for rice and staples. Perfect! 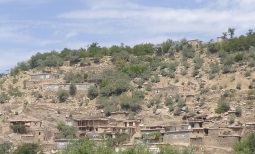 The houses are the same mudbrick with flat roofs. With their flat roofs, stacked kindling and occasional satellite dish, they are not surprisingly, similar to the houses in Tibet and Ladakh. I have a sense of déjà vu. Bare brown hills in shades of beige and brown merge into streaks of red rocks. Fast flowing rivers rush past the road and we splash through some smaller ones. A hillock is crowned with a fort from yesteryears and my sense of déjà vu increases. Over the pass, we climb down and I am squarely in Hazara country. It is safe to take off the burqa now Tariq tells me, and I acquiesce happily. 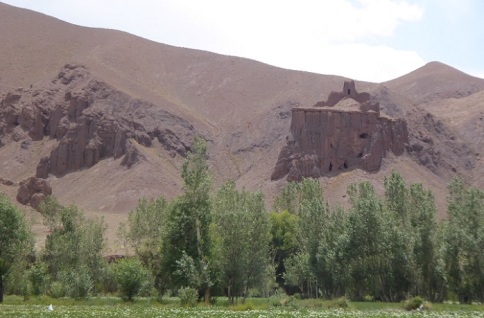 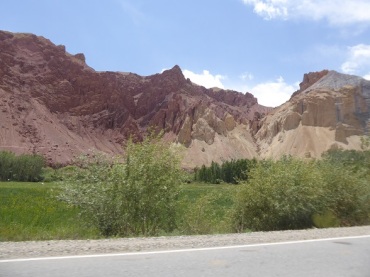 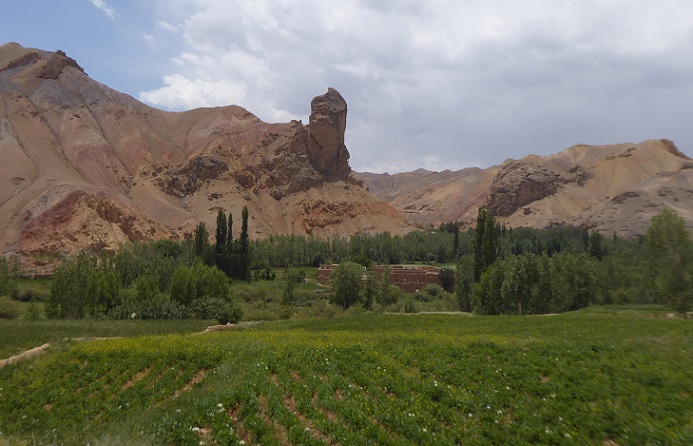 This is truly like being back in Ladakh! The fields are not of barley but potatoes at this elevation, but the houses are the same, the brown hills behind, the same. Even the taller gray mountains with their capes of snow are the same. The poplars along the road and the apricot orchards are the same. The faces of the people bear a resemblance to the Ladakhis and Tibetans. I feel at home home and wear a grin as we drive into Bamiyan. 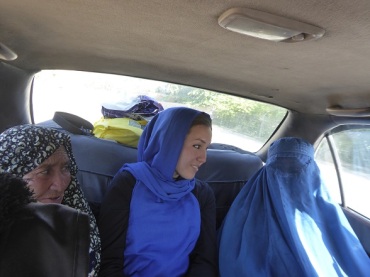 On the way back, I travel with a family. Sitting in the backseat with a young woman and her mother-in-law we chatter non-stop. Draped in a chador, nobody gives me a second glance, even when we stop briefly to pick mulberries off a tree by the river bank. I don the burqa again but only for a short stretch this time around.